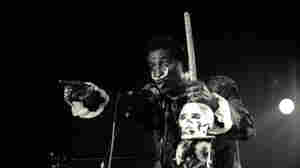 Because You're Mine: Searching For The Children Of Screamin' Jay Hawkins

April 25, 2020 • His signature song, "I Put A Spell On You," has a long legacy on its own and in songs that sample it. But Hawkins' dying wish for his dozens of children to meet created a new chapter in his story.

January 1, 2001 • Blues Musician Screamin' Jay Hawkins was an eccentric man. He wore outlandish outfits, claimed to practice voodoo and carried a skull named Henry on stage with him at every gig he played. But when his close friend and official biographer, Maral Nigolian, learned that Jay Hawkins had 57 children, she was shocked. After his death last February, Nigolian decided to look for the children of Screamin' Jay Hawkins to bring them together for a reunion. As independent producer Alix Spiegel reports, what seemed like a small simple idea, turned into a full-time occupation. The Website Nigolian posted drew thousands of responses, most from people who hoped to be connected to the man, some from people who actually were. The oldest of what soon became perhaps 75 children, Suki Lee Anne Hawkins remembers mostly her father's absences. She never knew he had any other children. Another child, Debra Roe, was 23-years-old before she learned that Screamin' Jay Hawkins was her father. This summer, Nigolian brought together these two women and some of the other 33 Hawkins children she has identified. It was a kind if practice for a bigger reunion she is planning for March. And it was rough. No one could believe Screamin' Jay had fathered so many. (22:00) Find out more at: http://www.jayskids.com.

February 14, 2000 • Screaming Jay Hawkins, a blues singer and pianist has died. Best known for his version of I Put a Spell on You, which was recorded after a night of heavy drinking. He ended up singing it with a series of groans, screams and yells. The song developed a following, and the style became his trademark. Hawkins later added bizarre stage props, such as coffins, rubber snakes and spiders to his act. Linda talks with Bill Wax, host of Stormy Monday Blues, a weekly blues show on WPFW-FM in Washington, about Screaming Jay's career.