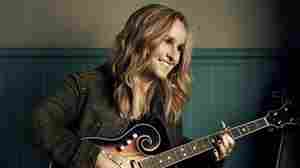 "What's gonna all bring us together is when we recognize that diversity in each other and not be afraid of it," Melissa Etheridge says. Courtesy of the artist hide caption

November 26, 2014 • Etheridge talks about being accepted by her conservative hometown, being truthful with the public, getting married and living her monster-ness.

June 17, 2010 • Tell Me More host Michel Martin recently sat down with Etheridge to talk about music and motherhood.