Accessibility links
Dolphins' Story Is About Race And Bullying, But Not The Way You Think : Code Switch The sports world has been transfixed by the story of a biracial NFL player who abruptly quit his team after he said he was bullied and taunted with racial slurs by a white teammate. But players of all races rallied around the alleged bully, a fact owing to the league's peculiar locker room culture.

Dolphins' Story Is About Race And Bullying, But Not The Way You Think

Dolphins' Story Is About Race And Bullying, But Not The Way You Think 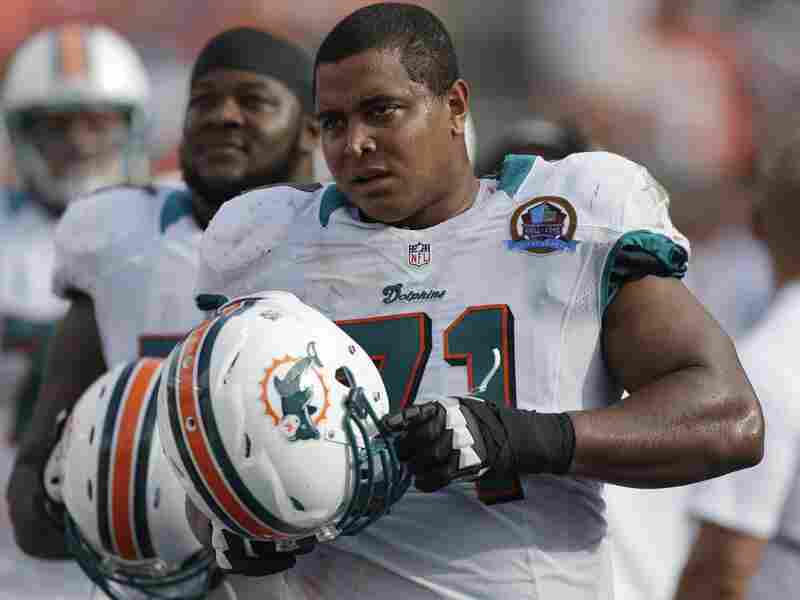 Jonathan Martin would have been the first fourth-generation African-American Harvard student ever, had he not opted to go to Stanford instead. Teammates and his high school coach said that other players had trouble relating to him because of his background. Wilfredo Lee/AP hide caption 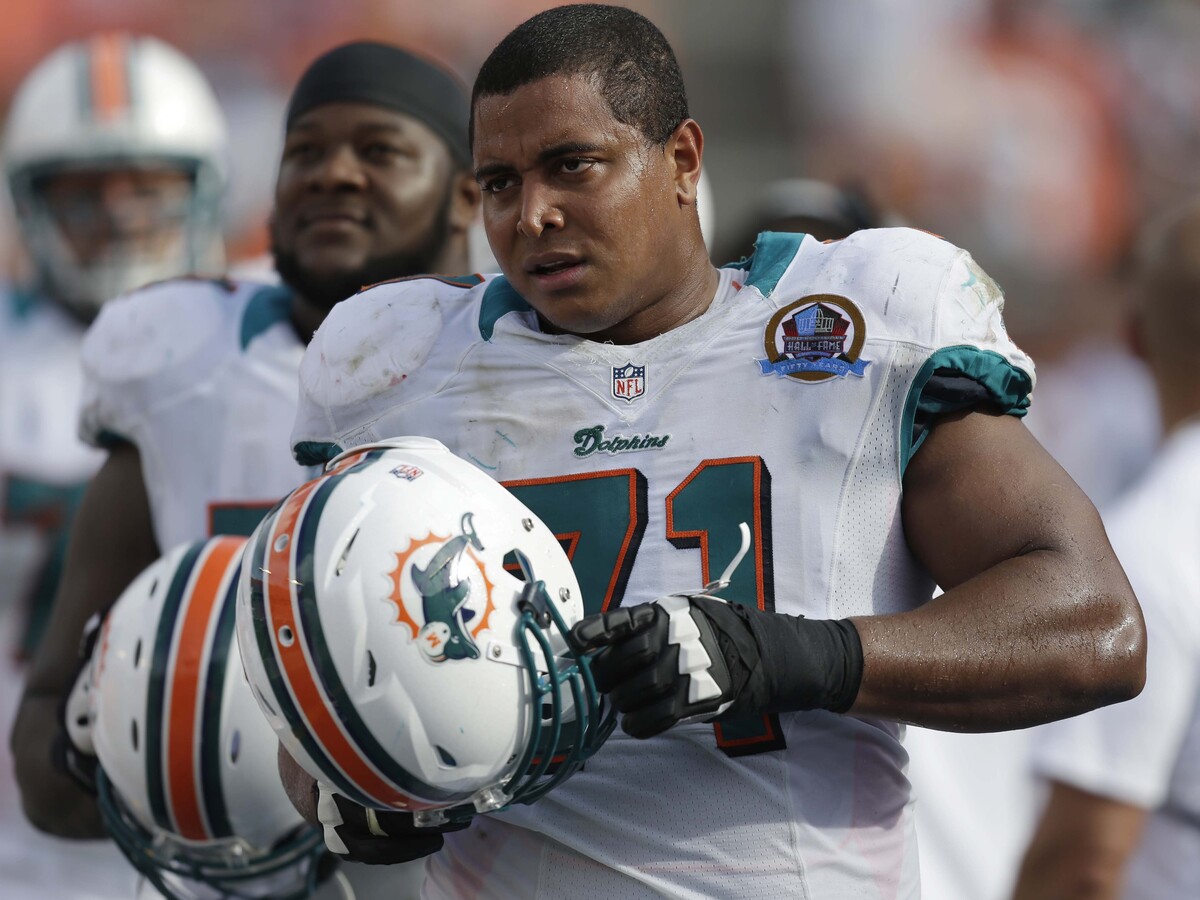 Jonathan Martin would have been the first fourth-generation African-American Harvard student ever, had he not opted to go to Stanford instead. Teammates and his high school coach said that other players had trouble relating to him because of his background.

Over the last few days, the sports media has been transfixed by the story of Jonathan Martin and Richie Incognito, two burly offensive lineman who play for the Miami Dolphins. Martin, a 24-year-old, second-year pro, abruptly walked away from the team last week after an incident with Incognito, 30, his frequent tormentor and the offensive line's unofficial leader. While the team initially downplayed Martin's departure, it has since suspended Incognito. Audio of threatening voice messages — which include racial slurs — have been made public. (Martin is black; Incognito is white.)

Martin's lawyer released a statement that said that in addition to verbal harassment from teammates, he was the victim of a "malicious physical attack by a teammate." The NFL players' union announced that it's launching an investigation.

This story is only getting twistier: There are reports that the team's coaching staff directed Incognito to go after Martin last year in order to help "toughen him up."

Folks are talking about this story a lot — as a way to discuss workplace harassment, bullying and even the macho culture of the NFL. But very little of the story feels neat. It muddies up stereotypes about race and class, notions of racial solidarity, and ideas about violence and masculinity.

A Reversal Of Narratives

If you were to take the characters in this story — the rich kid, the black kid, the problem jock, the gentle giant — and reassemble them without context, you'd likely arrange them wrong. Martin hardly fits the profile of an NFL athlete; he didn't grow up playing on Friday nights in Texas or scoring touchdowns to get his family out of the hood. (By that description, most NFL players don't fit the profile, but rock with us here.)

All the coverage has highlighted Martin's genteel background. The Times first described Martin as "a classics major who attended Stanford and is the son of two Harvard graduates," while our colleague Mike Pesca points out that Martin would have been the first fourth-generation African-American to go to Harvard — had he not opted for Stanford instead.

"Incognito, on the other hand, he had to transfer schools. He was suspended and dismissed from every school he went to. Got in fights, voted NFL's dirtiest player. There's a long laundry list of things that he's done in terms of getting suspended, getting in trouble with the law."

And so Martin's old high school coach connected the dots.

"Bullies usually go after people like him. With his background, he's a perfect target. ... Before [Martin] wasn't around Nebraska, LSU kind of guys. He's always been around Stanford, Duke, Rice kind of players. ... In locker rooms full of Nebraska, LSU, Southern Cal players, Miami players, they'll look at this as a weakness."

Basically, the story the coach is laying out is one in which the massive, otherwise intimidating black guy is being picked on by his better-compensated white teammate for not being 'hood enough. (Wait, what?)

Incognito is also a millionaire — Incognito's 2013 salary is several times that of Martin's — so the class-envy storyline isn't so neat. So might racial animus explain why this narrative is so mixed up?

Incognito allegedly called Martin a "half-nigger" on his voicemail, suggesting that race was at the root of their beef. But the alleged slur has been met with shrugs by Dolphins players willing to talk to the news media.

And a lot of those players were black.

"Richie is honorary," an unnamed player told a reporter for the Miami Herald. "I don't expect you to understand because you're not black. But being a black guy, being a brother is more than just about skin color. It's about how you carry yourself. How you play. Where you come from. What you've experienced. A lot of things."

"I don't have a problem with Richie," Mike Wallace, a wide receiver, told the same reporter. "I love Richie."

According to the Herald, black players on the team felt like they couldn't relate to Martin because of his background.

Even black non-teammates, like the Hall of Fame defensive tackle Warren Sapp, shrugged off Incognito's deployment of "nigger."

"One time [Incognito] kicks me in a game and calls me the N-word," Sapp told Dan Patrick. "I looked at him and said, 'Oh you want me to punch you in the mouth so they kick me out of the game?' "

"Come on, in a football game?" Sapp said. "He only wants to get me kicked out. He don't want to fight. Because the only thing he got to do is call me after the football game, just come over to the locker room and say it after the game. Now we've got a real situation."

Sapp draws an important distinction — the rules on the field are different from the rules off it. That brings us to the last dimension of this story that's drawn a lot of attention: the culture of the game itself.

Even Massive Left Tackles Can Be Bullied

The story has often settled here: the bully-victim narrative.

It was Martin's refusal to fight back that was seen as evidence of his lack of toughness.

"If Incognito did offend him racially, that's something you have to handle as a man!" said an anonymous NFL front office person. Indeed, Martin's own general manager allegedly told him that he should punch Incognito to stop the taunting.

But Martin wasn't always thought of as "soft." Before he was drafted, scouts regularly said he played with a mean streak. That soft-rich-kid narrative was reminiscent of the way the former NBA star Grant Hill was regarded; he, too, was a well-off kid who went to Duke and whose mother was Hillary Clinton's roommate at Wellesley. (And that narrative persisted even though he did things like this.)

This story also reminds us that we think of violence very differently depending on where, when and to whom it happens. (All together now: There are only contexts and consequences.) While anti-bullying advocates applauded the way Martin handled the incident, lots of players called him a "coward" for his approach — while, ironically, requesting to remain anonymous.

"I might get my ass kicked, but I'm going to go down swinging if that happens to me, I can tell you that," one player told Sports Illustrated.

Take it away, Ta-Nehisi Coates:

"If you squint hard enough you might dimly perceive the outlines of some phantasm, some illusion. You might see power back there behind the scrum. You might see how a national valorization of violence attaches itself to profit. On the streets of Chicago, violently confronting someone for disrespecting you is evidence of a 'culture of pathology.' In the NFL it is evidence of handling things 'the right way.' "

You can imagine that this is where all these threads start to re-entangle. It's not so unlikely that someone who grew up the way Martin did developed a certain way of interacting with the world. He's a black man who grew up in tony circumstances who was probably constantly aware of being viewed as a threat. Questlove, the Roots' drummer and another large black dude used to traveling in moneyed circles, recently wrote about the dissonance of that experience:

"I'm in scenarios all the time in which primitive, exotic-looking me — six-foot-two, 300 pounds, uncivilized Afro, for starters — finds himself in places where people who look like me aren't normally found. ... I mean, that is a crazy way to live. Seriously, imagine a life in which you think of other people's safety and comfort first, before your own. You're programmed and taught that from the gate. It's like the opposite of entitlement."

For all of Martin's size and skin color and upbringing, he was in a different world in the NFL locker room. Andrew Sharp from Grantland wrote about just how different the norms of the locker room are from other parts of society:

"Whatever you think of Incognito, the response from players makes the story more complicated than just some evil offensive lineman. Or at least murky enough to leave me with other questions... For example, is this whole thing a case of stupid macho culture run amok in pro sports? Absolutely. This is every MAN UP beer commercial taken to the most awful extreme.

"But imagine how screwed up in the head you'd have to be to go out and play offensive line every week for a decade in the NFL. If guys convince themselves that it's time for them and their teammates to MAN UP every Sunday, and it works, then the macho culture for them — professional football players who play the sport that we just talk about — isn't necessarily as stupid and juvenile as it seems to everyone else.

"But on some level, locker rooms will always be pretty removed from reality or any sane standards of decency, and we couldn't change it if we tried...Casual fans and people like my mom may recoil at the details from Miami, but the general absence of horror around the NFL hints at one [of] the bigger lessons from all this. There's a disconnect between people who play professional sports and people who watch them, and that gulf is probably a lot wider than we realize. Even if a world full of all-access shows and instant information allows us to know more about athletes and locker rooms than ever before, we may never actually understand any of this."

For whatever reasons — his upbringing, his temperament, who knows? — Martin realized that he didn't have to subject himself to the harsh idiosyncrasies of his workplace. He could walk away from football at any time and still live a comfortable life. (His high school coach said that Martin was still planning to go to Harvard Law School whenever his NFL career ended.) He had other options, and he exercised them.

Race, class resentment, "culture of violence" — all of these things might explain the dynamics in the Dolphins' locker room. But they don't explain why so many players have taken to anonymously sniping at Martin in the press. All that owes to Martin's unusual decision to walk away.

He wasn't merely exercising his own choice to leave, but indicting their choices to stay.

An earlier version of this story identified Jonathan Martin as biracial, which is how he's been identified in news reports. But one of our colleagues at NPR who knows Martin's family personally told us that both of his parents are black.