Paul Collins has written books about: 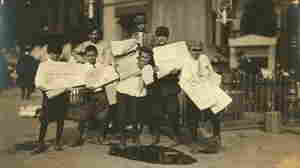 How A New York 'Murder' Sparked The Tabloid Wars

June 25, 2011 • When a body washed up on the shores of New York's East River in 1897, the race to solve the murder sparked one of the country's first great newspaper wars. Weekend Edition's literary detective Paul Collins tracks that war's progress in his new book, The Murder of the Century.

How A New York 'Murder' Sparked The Tabloid Wars

March 31, 2006 • Read an excerpt from Banvard's Folly: Thirteen Tales of People Who Didn't Change the World by Paul Collins.

March 31, 2006 • Sometimes authors' best works are their first. The tale of an imaginary universe where elevators are really important and the story of the first giraffe in Europe are among librarian Nancy Pearl's selections of must-read literary debuts.

Authors' Lowlights, Resurrected from the Dustbin

Authors' Lowlights, Resurrected from the Dustbin

A Priest's Early Quest to Create a Bulletproof Vest

April 30, 2005 • In 1893, the mayor of Chicago was shot and killed in his home. That murder inspired a local priest, Brother Casimir Zeglen, to invent an early bulletproof vest. Historian Paul Collins rediscovered the forgotten inventor and tells Scott Simon the details.

A Priest's Early Quest to Create a Bulletproof Vest