Alan Eisenstock has written books about: 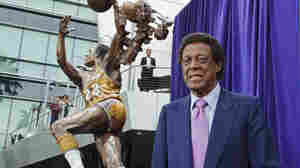 June 1, 2018 • Throughout his life, legendary basketball player Elgin Baylor suffered through many racial indignities, which are detailed, along with his career, in his book, Hang Time.

Dr. Anthony Youn is a board-certified plastic surgeon, and his comments have appeared in publications such as US Weekly, Star and The Detroit Free Press. Amy Youn hide caption

June 13, 2011 • Dr. Anthony Youn grew up as one of a few Asians in a predominately white town. He had thick glasses, bowl-cut hair and a protruding jaw. After high school, he got reconstructive surgery on his jaw but still couldn't fit in or find a girlfriend. His immigrant father pushed him toward medical school, and he became a plastic surgeon. Host Michel Martin speaks with Youn about his new memoir In Stitches. In it, he shows that earning an M.D. comes with humor and insecurities. He also explores a medical world that he felt was not just focused on healing patients but also on gaining power and wealth.

January 16, 2009 • Comedy Central named him one of its 100 best comics, but life hasn't been all laughs for Robert Schimmel. Still, it was his sense of humor that kept him sane when cancer killed his sitcom deal — and threatened to kill him.

March 12, 2008 • Comedian Robert Schimmel has suffered tragedies, including the death of his child and his own battle with cancer. But throughout it all, Schimmel managed to find strength in humor. His recent memoir is Cancer on $5 a Day.