Henry Kissinger has written books about: 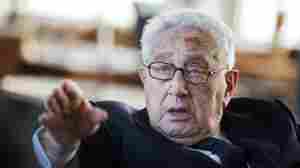 September 6, 2014 • A stable global system is needed more than ever, Kissinger says in his new book, World Order. He explains why he sees Iran as a "bigger problem" than the Islamic State and offers his views on Ukraine.

June 8, 2011 • Forty years after the U.S. and China resumed formal relations, the man who did much to advance the reconciliation tells NPR it's "of crucial importance" how the relationship between the powers evolves. Former Secretary of State Henry Kissinger's new book is On China..