Rick Reilly has written books about:

Loved Ones: A Death, A Dog, And Dumb Diversion

June 2, 2011 • Sue Miller and Alexander McCall Smith deliver vivid character studies in their latest novels, while Christopher Hitchens reflects on his personal and political evolution, Rick Reilly jumps into some sports from hell, and Paul Greenberg takes a hard look at fish farming. 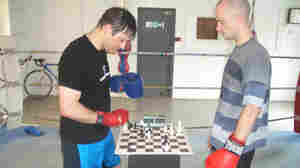 Chess boxing was one of the unconventional sports Rick Reilly observed. During the matches, the board and pieces became drenched in sweat. Reilly asked his host, promoter Tim Woolgar, how often they get washed. His answer: "Uh, never." Cynthia "TLC" Reilly hide caption

June 13, 2010 • In his long career as a sports columnist, Rick Reilly has covered the biggest games, including the Super Bowl and World Series. But for his new book, Sports from Hell, Reilly sought out the championships of decidedly less conventional sports, such as bull poker, chess boxing and jarts.