Martin Meredith has written books about: 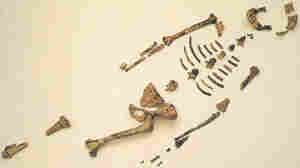 Fossil remains of Australopithecus afarensi, known as "Lucy," were first discovered in Ethiopia and Tanzania in the 1970s. Dirk Van Tuerenhout/AP hide caption

May 12, 2011 • Anthropologists and archeologists long believed humans evolved in Asia. So when a set of hominid remains was discovered in Africa, it took a while for the find to stick. In Born in Africa, author Martin Meredith details the battles in the search for the origins of human life.

April 3, 2008 • In Zimbabwe, President Robert Mugabe's grip on power seems to be weakening. Election results show his party has lost control of parliament and his only course of action may be to accept a run-off vote to save his seat as president. Journalist Martin Meredith discusses the situation in the southern African nation.

Author Martin Meredith and 'The Fate of Africa'

July 5, 2005 • Journalist and historian Martin Meredith has written extensively on Africa and its recent history. His new book is The Fate of Africa: From the Hopes of Freedom to the Heart of Despair.

Author Martin Meredith and 'The Fate of Africa'