Don Yaeger has written books about: 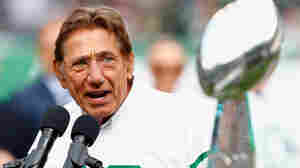 Joe Namath speaks during halftime of a New York Jets game in 2018. As quarterback, he led the Jets to a Super Bowl win in 1969. Mike Stobe/Getty Images hide caption

He Could Go 'All The Way': Joe Namath Enters His 4th Quarter

May 22, 2019 • In a new autobiography, the great NFL quarterback details his ups (like a Super Bowl victory) and downs (like the Suzy Kolber incident and alcoholism) as he stares down his legacy.

He Could Go 'All The Way': Joe Namath Enters His 4th Quarter 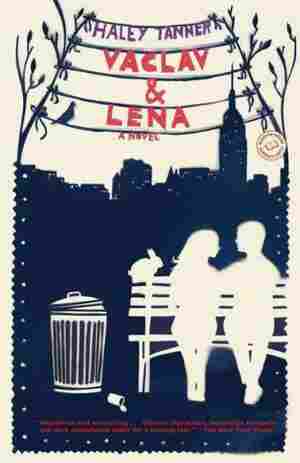 Love Comes Around: In Marriage, In Families, In Sickness, In Foster Care 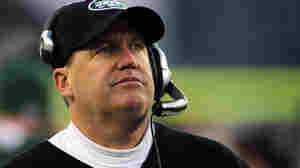 In Play Like You Mean It, New York Jets coach Rex Ryan describes how his passion for football led him to pursue a coaching career. Jim Rogash/Getty Images hide caption

In Football And Life, Ryan Plays Like He Means It

May 13, 2011 • Rex Ryan, the head coach of the New York Jets, has been called a lot of things: boastful, brash, profane and even fat. But one thing you can't call him is ineffective. In his new book, Play Like You Mean It, Ryan writes about his journey to the top.

In Football And Life, Ryan Plays Like He Means It

Excerpt: 'I Beat the Odds: From Homelessness, to The Blind Side, and Beyond'

How The 'Blind Side' Kid 'Beat The Odds'

February 9, 2011 • Michael Oher's journey from homelessness to football stardom has been the subject of a best-selling book — as well as the Academy Award-winning film The Blind Side. Now, Oher hopes to separate real-life fact from movie fiction in his own words.

How The 'Blind Side' Kid 'Beat The Odds'

June 29, 2007 • Mike Pressler was dumped as Duke's lacrosse coach when rape charges were filed against three of his players. But the charges were dropped and the prosecutor in the case was disbarred. Now, Pressler is coaching again and has written a book.