Henry Cockburn has written books about: 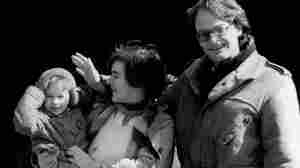 Patrick and Jan Cockburn pictured with their son Henry. Ever since he was a child, Henry was "intensely alive and interested in everything and everybody around him," says his father. Courtesy of Patrick Cockburn/ Scribner hide caption

February 26, 2011 • Journalist Patrick Cockburn was used to tracking the Taliban in the mountains of Afghanistan. But he wasn't prepared for the battle he faced at home when his son Henry was diagnosed with schizophrenia. Now, father and son have co-written a memoir about the experience.