Michael Waltrip has written books about: 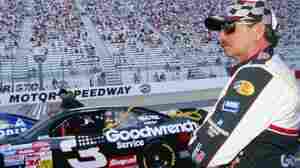 February 18, 2011 • Ten years ago Friday, 43 drivers lined up to race NASCAR's Daytona 500. One of them was Dale Earnhardt, who died in a crash in the last lap. Fellow racer Michael Waltrip, who won that race, details the day's events in a new book: In the Blink of an Eye: Dale, Daytona, and the Day that Changed Everything.