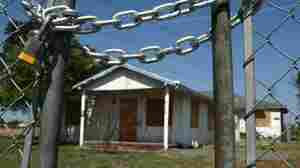 Places in California, including Stockton, are pocked with abandoned homes, like this one in 2008. Justin Sullivan/Getty Images hide caption

January 12, 2011 • The South and West may become the Rust Belts of the 21st century, according to a new study from the Mortgage Bankers Association. It says the economies in these regions — in places like California and Florida — may never fully recover from the burst of the housing bubble.