Curtis Wilkie has written books about: 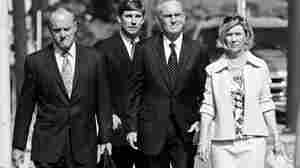 Dickie Scruggs (center right), his wife, Diane, and son, Zach, walk with his attorney to the courthouse where he would be sentenced to five years in prison. Bruce Newman/Oxford Eagle hide caption

December 22, 2010 • Curtis Wilkie is the author of The Fall of the House of Zeus, in which he chronicles the life of Dickie Scruggs, a trial lawyer who made millions in lawsuits targeting the asbestos and tobacco industries — and then wound up in prison for attempted bribery.