Garry Wills has written books about: 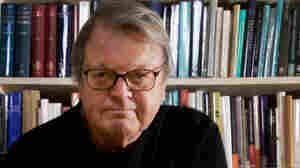 Garry Wills' Adventures As An 'Outsider Looking In'

October 18, 2010 • In his new memoir, Pulitzer Prize-winning writer Garry Wills explains his career as a lifelong observer. In Outside Looking In, he talks books, politics and family — and explains how his father's philosophy about the word "cannot" is one reason he became a conservative.

Garry Wills' Adventures As An 'Outsider Looking In'

January 23, 2010 • Since the Manhattan Project, the U.S. president has wielded more military power than ever before. And in the opinion of historian Garry Wills, more than the commander-in-chief is allowed by the Constitution. Guy Raz talks with Wills about his new book, Bomb Power: The Modern Presidency and the National Security State.

October 4, 2007 • In a new book about the constitutional separation of church and state, Pulitzer Prize-winning historian Garry Wills insists that that separation was meant as "the great protector of religion, not its enemy." That hasn't stopped fervent believers from challenging the concept.

'Henry Adams and the Making of America'

September 15, 2005 • In his latest book, historian Garry Wills takes a new approach to a history of America written by a member of the famous Adams family. In Henry Adams and the Making of America, Wills refutes the accepted reading of Adams' history as an attack on Thomas Jefferson and provides interesting insights into our national history that resonate in politics today. Wills is professor of history emeritus at Northwestern University in Evanston, Ill.

'Henry Adams and the Making of America'