Jason Goodwin has written books about: 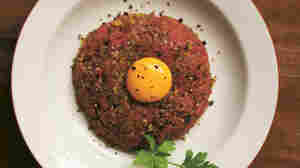 Assassin's Steak Tartare, one of the recipes from Yashim Cooks Istanbul, inspired by the dishes cooked by the lead character in the popular Yashim detective series of books. Jason Goodwin hide caption

November 15, 2016 • The Yashim detective series features an intrepid sleuth chasing mysteries in 19th century Istanbul. He cooks while he puzzles over clues. Readers who clamored for the recipes have gotten their wish.

August 14, 2008 • For historian-turned-mystery-writer Jason Goodwin, the bustling Istanbul bazaar is a perfect setting for murder, and the evening call to prayer is "a good time to kick a man to death in the street."