Wayne Curtis has written books about: 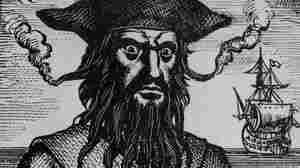 Captain Edward Teach, better known as Blackbeard, is said to have tucked slow-burning fuses into his beard and lit them on fire before plundering towns for gold and rum. Hulton Archive Circa/Getty Images hide caption

August 16, 2013 • Pirates, pokers and alleged demonic origins — the history of rum is filled with raucousness and rebellion. To celebrate National Rum Day, we bring you tales from this drink's past, including its laudable origins as a food waste solution.

A Tale Told over Cocktails: 'Bottle of Rum'

A Tale Told over Cocktails: 'Bottle of Rum'