H. A. Rey has written books about:

NPR stories about H. A. Rey 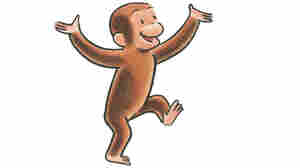 Curious George — who was originally named Fifi — turns 75 this year. Despite some dated themes (we're looking at you, Man with the Yellow Hat) George is now a multimillion-dollar franchise. Margaret Rey says she and her husband had no idea what Curious George would become. "We loved monkeys and just wrote a book about a monkey," she said. Houghton Mifflin Harcourt hide caption

September 28, 2016 • George has had many close calls, but did you know he once outran the Nazis? Despite some dated themes (we're looking at you, Man with the Yellow Hat) George is now a multimillion-dollar franchise.

August 6, 2006 • Before he opened his own place (a bar and restaurant in Santa Monica, Calif., called Father's Office) Sang Yoon served up gourmet cuisine at Michael's. As our series of summer reading chats continues, he reveals a taste for books about eats.