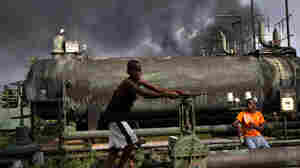 Children play on a Nigerian oil-flow station in 2007. Nigeria, a major oil source for the United States, is riddled with ancient pipes and constant spills. That, plus the geopolitical challenges involved, is why much of Nigeria's crude is the kind of "tough oil" that author Michael Klare describes. George Osodi/AP hide caption