Jane Goodall has written books about: 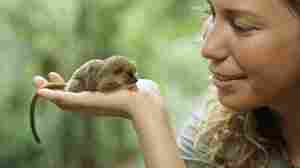 During a wildlife survey in Madagascar, Mayor discovered a new species of mouse lemur. "[It] weighs less than two ounces, fits in the palm of your hands," she says. Mark Thiessen/Courtesy of Mireya Mayor hide caption

January 3, 2015 • The explorer's life plays out like an adventure film. But before she ever went diving with great whites, she was cheering for the Miami Dolphins — until a required science course changed her plans.

September 13, 2009 • Thousands of species go extinct every year, but famed biologist Jane Goodall says she refuses to give in to despair. Her latest book is Hope for Animals and Their World: How Endangered Species Are Being Rescued from the Brink.

March 12, 2009 • Author and human rights activist Greg Mortenson has devoted his life to building schools in the remote areas of Pakistan and Afghanistan. Mortenson, talks about his efforts, as featured in his New York Times best-seller, Three Cups of Tea.