Elizabeth Winslow has written books about: 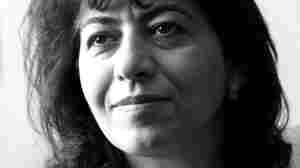 Dunya Mikhail is an Iraqi-American poet who teaches in Michigan. She has published five books in Arabic and two in English. Michael Smith/Courtesy of Dunya Mikhail hide caption

March 21, 2013 • Dunya Mikhail fled her homeland in the wake of the first Gulf War, after her writing was labeled subversive by Saddam Hussein's government. She has never physically returned to Iraq, but she remembers it in her poetry.

July 6, 2007 • War is a recurring theme for poet Dunya Mikhail, an Iraqi exile who fled her country after being placed on Saddam Hussein's enemies list. Her poem "The War Works Hard" offers an ironic take on the meaning and consequence of war.