Stephen Mansfield has written books about: 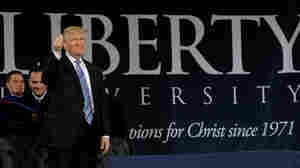 President Trump addresses the crowd before delivering the keynote address at Liberty University's commencement in Lynchburg, Va., on May 13. Yuri Gripas/Reuters hide caption

October 29, 2017 • In his new book about the president and faith, author Stephen Mansfield argues evangelical witness has been hurt by the church's support for Trump. 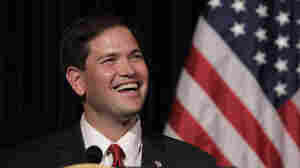 Sen. Marco Rubio has long claimed his parents fled Cuba after Fidel Castro rose to power when in fact they left a few years before.

October 25, 2011 • Washington Post humor blogger Alexandra Petri says that when it comes to political biographies — from that of Marco Rubio to the writings of Thucydides — veracity can be hard to come by.

March 20, 2007 • Tom DeLay, the former House Republican chief, defends his and the GOP's leadership during its 12 years of power in Congress and says he will continue to fight charges that he misused campaign money.