Malu Halasa has written books about: 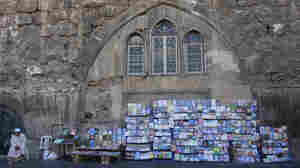 A Syrian book vendor waits for customers at his street stall in the old city of Damascus, Syria, on Sept. 24, 2011. Muzaffar Salman/AP hide caption

September 5, 2013 • Do recent events have you wishing for more insight into Syria? Critic Marcela Valdes — with some help from experts on the region — recommends five great reads. From the diaries of a threatened novelist to a study of Syrian lingerie, these books reveal new facets of a complex country.

March 5, 2005 • Recent anti-Syria protesters in Lebanon include some of the authors featured in an anthology called Transit: Beirut. Their highly personal, often experimental work offers glimpses of a different side of the city.