Charles Glass has written books about: 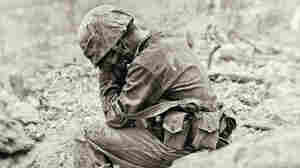 The Deserters is Charles Glass' second book relating to World War II. His last book, Americans in Paris, told the story of the U.S. citizens who remained in the French capital after the 1940 German invasion. Penguin Press hide caption

June 17, 2013 • In his new book, journalist Charles Glass explores the little-known history of thousands of American and British soldiers who deserted during World War II. Glass describes how the strain of war can push a soldier to the breaking point — and how the line between courage and cowardice is never simple.