Terry Hunt has written books about: 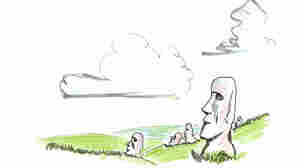 What Happened On Easter Island — A New (Even Scarier) Scenario

December 10, 2013 • Whatever happened on Easter Island, it wasn't good. Polynesians landed there, farmed, thrived, built their famous statues, and then things went very bad, very fast. Sixteen million trees vanished. What happened? Was this a case of ecological collapse? Not exactly, say two anthropologists. It was, arguably, worse than that.