Michael Emberley has written books about: 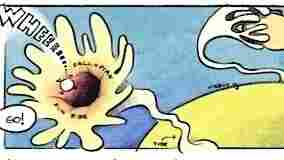 Michael Emberley's illustrations, like this one showing an egg traveling through a fallopian tube, make sexual health information accessible to an elementary and middle school audience. But elements of the art, including naked bodies, make some parents uncomfortable. Candlewick Press hide caption

September 21, 2014 • It's Perfectly Normal, a 20-year-old illustrated sex-ed book for kids, is meant to teach children about sexual health, puberty and relationships. It's one of the most banned books in America.