Priya Parmar has written books about: 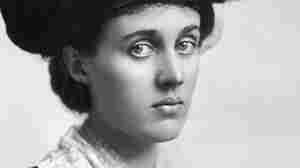 Unlike her sister, Vanessa Bell, seen here circa 1910, didn't keep a journal. "Her voice is largely unheard and I was really interested in that," Priya Parmar says. George C. Beresford/Getty Images hide caption

December 28, 2014 • In Vanessa and Her Sister, Priya Parmar imagines what Vanessa Bell wrote in her journal when she and Woolf were helping to form the Bloomsbury Group, a gathering of London artists and intellectuals.