David Vine has written books about: 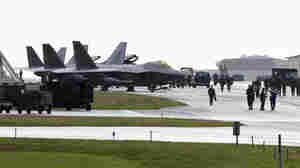 U.S. Air Force F-22 Raptors are seen parked at Kadena Air Base on the island of Okinawa in Japan. The U.S. military established a presence on Okinawa during World War II. Yoshikazu Tsuno/AFP/Getty Images hide caption

August 23, 2015 • David Vine's new book argues that the hundreds of U.S. bases in other countries come at a high cost, both at home and abroad. He suggests reducing such bases and increasing diplomatic engagement.