Aja Raden has written books about: 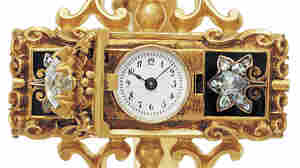 According to Aja Raden, a Hungarian countess commissioned the first wristwatch from watchmaker Patek Philippe around 1868. "[It] was a spectacularly expensive piece of jewelry," the author says. Courtesy of the Patek Philippe Museum via Harper Collins hide caption

December 14, 2015 • Author Aja Raden says jewelry is the perfect lens through which to view human history. In Stoned, she tells the story of the glass beads used to purchase Manhattan and the rise of the wristwatch.