Erin Baines has written books about: 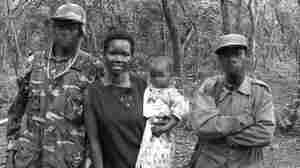 The picture was taken in 2006 in the Democratic Republic of Congo, after Evelyn Amony was rescued. Holding her youngest daughter, she was at a meeting to negotiate with members of the Lord's Resistance Army. The two men, who had also been abducted, are her relatives. The faces of the men and baby are blurred to protect their identities. Courtesy of Erin Baines hide caption

June 17, 2016 • She was abducted at age 11 by Joseph Kony's rebels and forced to bear his children. It took Evelyn Amony years to recover. Now she works to help other women caught up in conflict.