Milan Vaishnav has written books about: 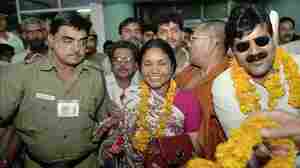 Phoolan Devi, popularly known as the "Bandit Queen," received garlands in New Delhi in 1996 after she was elected to parliament. She spent 11 years in jail on charges of murder and banditry, and was released in 1994. She was assassinated in 2001. John Moore/Associated Press hide caption

A Look At Why 'Crime Pays' In Indian Politics

February 11, 2017 • Milan Vaishnav's new book, When Crime Pays: Money and Muscle in Indian Politics, examines why so many criminals become politicians in India — and why so many voters embrace them.