Dan Ozzi has written books about: 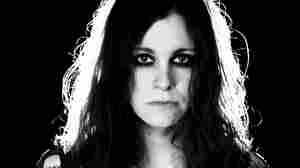 Laura Jane Grace burned her birth certificate at a concert in North Carolina in 2016 in protest of the state's "bathroom bill" requiring transgender people in government facilities to use bathrooms that match the sex on their birth certificate. Ryan Russell/Total Treble Music hide caption

April 4, 2017 • The founder of the band Against Me! felt so conflicted about her gender growing up that she thought she was schizophrenic. Since transitioning, she's become more in touch with herself.