Books by Dan Rather

Dan Rather has written books about:

NPR stories about Dan Rather 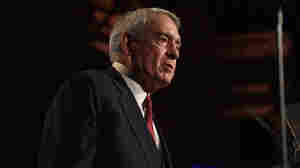 Dan Rather speaks at the Gotham Independent Film Awards in 2015. His new collection of essays is called What Unites Us. Larry Busacca/Getty Images for IFP hide caption

November 3, 2017 • Equally optimistic and concerned, the longtime television news anchor — now a Facebook phenomenon — has written a book that doesn't hide his love of country.