Brian Frederick has written books about: 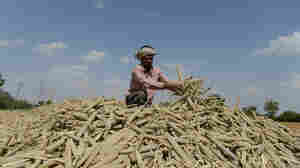 A farmer in India piles millet in a field. Grains such as millet and sorghum pack a powerful nutritional punch, but they are overlooked for calorie-laden commodity crops such as wheat or maize. Sam Panthaky/AFP/Getty Images hide caption

Do Healthy Diets Protect The Planet? As The U.N. Meets, A Focus On Sustainability

September 23, 2018 • As United Nations leaders gather in New York, top food and nutrition experts are convening for a forum to talk about how people around the globe can have both a nourished diet and a healthy planet.