Ben Schott has written books about: 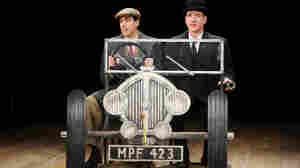 Jeeves And Wooster, But Make It A Modern Spy Novel

December 2, 2018 • Ben Shott has taken the iconic P.G. Wodehouse comic characters (with the blessing of the Wodehouse estate) and twisted "five degrees to starboard" in his new novel Jeeves and the King of Clubs.

Jeeves And Wooster, But Make It A Modern Spy Novel