Enrique Olvera has written books about: 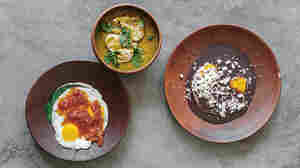 Enrique Olvera's flagship eatery, Pujol, has repeatedly made lists of the best restaurants in the world. "The inspiration in our restaurant is home cooking and simple cooking," he says. "We've always been very connected to that. Whenever we want to travel for inspiration, we go to small towns in Mexico and visit people's homes." Courtesy of Araceli Paz hide caption

May 2, 2019 • Enrique Olvera's restaurant Pujol has made multiple "best-of" lists, but he nearly didn't have a culinary career. His new cookbook is inspired by the perfect imperfections of Mexican home cooking.