Renia Spiegel has written books about: 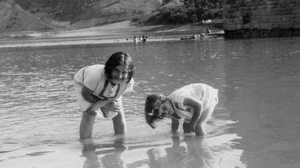 Renia Spiegel (left) and her younger sister, now known as Elizabeth Bellak, wade in the Dniester River around 1935. The photo can be seen on the cover of the published edition of Renia's Diary. Courtesy of Elizabeth Bellak/St. Martin's Press hide caption

September 30, 2019 • Renia's Diary spent decades in a safe deposit box before being published this week in the U.S. It was written by a Jewish teenager in Poland before she was murdered by the Nazis.