A collection of stories by the author of CivilWarLand in Bad Decline focuses on a somewhat skewed version of America and includes the misadventures of a male exotic dancer who is haunted by a departed maiden aunt and a self-help guru given to colorful metaphors. Reprint.

May 23, 2011 • Dive into the creepy-crawly side of literature with author Goldie Goldbloom's recommendations of chilling and disturbed lit. She suggests three gruesomely enchanting books that feature freakish oddities, bizarre love and talking corpses. 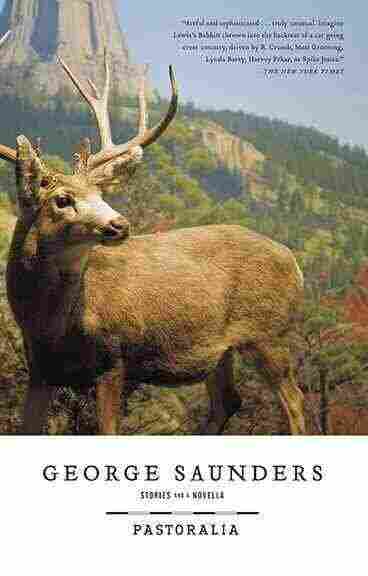 I have to admit I'm not feeling my best. Not thatI'm doing so bad. Not that I really have anything to complainabout. Not that I would actually verbally complain ifI did have something to complain about. No. Because I'mThinking Positive/Saying Positive. I'm sitting back on myhaunches, waiting for people to poke in their heads.Although it's been thirteen days since anyone poked intheir head and Janet's speaking English to me more andmore, which is partly why I feel so, you know, crummy.

"Jeez," she says first thing this morning. "I'm so tired ofroast goat I could scream."

What am I supposed to say to that? It puts me in a badspot. She thinks I'm a goody-goody and that her speakingEnglish makes me uncomfortable. And she's right. It does.Because we've got it good. Every morning, a new goat,just killed, sits in our Big Slot. In our Little Slot, a book ofmatches. That's better than some. Some are required tocatch wild hares in snares. Some are required to wear pioneergarb while cutting the heads off chickens. But not us.I just have to haul the dead goat out of the Big Slot andskin it with a sharp flint. Janet just has to make the fire. Sothings are pretty good. Not as good as in the old days, butthen again, not so bad.

In the old days, when heads were constantly poking in,we liked what we did. Really hammed it up. Had littlegrunting fights. Whenever I was about to toss a handful ofdirt in her face I'd pound a rock against a rock in rage. Thatway she knew to close her eyes. Sometimes she did this kindof crude weaving. It was like: Roots of Weaving. Sometimeswe'd go down to Russian Peasant Farm for a barbecue,I remember there was Murray and Leon, Leon wasdating Eileen, Eileen was the one with all the cats, but now,with the big decline in heads poking in, the RussianPeasants are all elsewhere, some to Administration but mostnot, Eileen's cats have gone wild, and honest to God sometimesI worry I'll go to the Big Slot and find it goatless.

This morning I go to the Big Slot and find it goatless.Instead of a goat there's a note:

Hold on, hold on, it says. The goat's coming, for crissake.Don't get all snooty.

Janet comes in from her Separate Area and her eyebrowsgo up.

"No freaking goat?" she says.

I make some guttural sounds and some motions meaning:Big rain come down, and boom, make goats run, goatsnow away, away in high hills, and as my fear was great, Idid not follow.

Janet scratches under her armpit and makes a sound likea monkey, then lights a cigarette.

"What a bunch of shit," she says. "Why you insist, I'llnever know. Who's here? Do you see anyone here but us?"

I gesture to her to put out the cigarette and make thefire. She gestures to me to kiss her butt.

"Why am I making a fire?" she says. "A fire in advanceof a goat. Is this like a wishful fire? Like a hopeful fire? No,sorry, I've had it. What would I do in the real world if therewas thunder and so on and our goats actually ran away?Maybe I'd mourn, like cut myself with that flint, or maybeI'd kick your ass for being so stupid as to leave the goatsout in the rain. What, they didn't put it in the Big Slot?"

I scowl at her and shake my head.

"Well, did you at least check the Little Slot?" she says."Maybe it was a small goat and they really crammed it in.Maybe for once they gave us a nice quail or something."

I give her a look, then walk off in a rolling gait to checkthe Little Slot.

"Well, freak this," she says. "I'm going to walk right outof here and see what the hell is up."

But she won't. She knows it and I know it. She sits onher log and smokes and together we wait to hear a clunkin the Big Slot.

No heads poke in and there's no clunk in either the Bigor Little Slot.

Then the quality of light changes and she stands at thedoor of her Separate Area.

"No goat tomorrow, I'm out of here and down thehill," she says. "I swear to God. You watch."

I go into my Separate Area and put on my footies. Ihave some cocoa and take out a Daily Partner PerformanceEvaluation Form.

Do I note any attitudinal difficulties? I do not. Howdo I rate my Partner overall? Very good. Are there anySituations which require Mediation?

Next morning, no goat. Also no note. Janet sits on her logand smokes and together we wait to hear a clunk in theBig Slot.

No heads poke in and there's no clunk in either the Bigor Little Slot.

Then the quality of light changes and she stands at thedoor of her Separate Area.

"Crackers, crackers, crackers!" she says pitifully. "Jesus,I wish you'd talk to me. I don't see why you won't. I'mabout to go bonkers. We could at least talk. At least havesome fun. Maybe play some Scrabble."

I wave good night and give her a grunt.

"Bastard," she says, and hits me with the flint. She's agood thrower and I almost say ow. Instead I make a horse-likesound of fury and consider pinning her to the floor inan effort to make her submit to my superior power etc. etc.Then I go into my Separate Area. I put on my footies andtidy up. I have some cocoa. I take out a Daily PartnerPerformance Evaluation Form.

Do I note any attitudinal difficulties? I do not. Howdo I rate my Partner overall? Very good. Are there anySituations which require Mediation?