Following an emotional breakdown, New York City newspaper columnist Carter Ransom returns home to Mississippi to confront his formidable father and a traumatic past marked by a twenty-five-year-old unsolved civil rights murder case that shattered his family. By the author of The Bridge. 50,000 first printing.

December 14, 2006 • If you're still crossing items off your holiday gift list, remember this: You don't have to worry about the right fit or color, if you pick a book. Karen Grigsby Bates found plenty of titles worth adding to your shopping list, in categories ranging from novels to cookbooks. 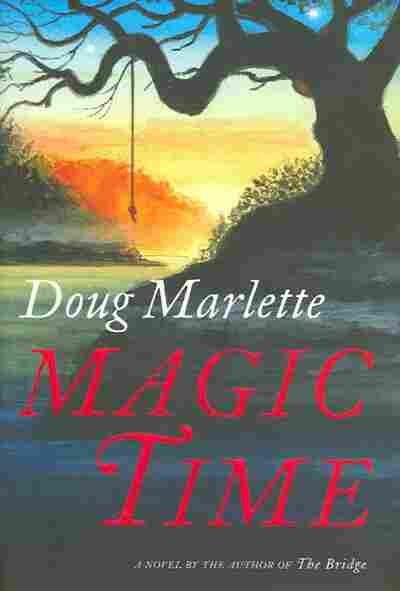 Troy
Carter ransom awoke curled up in the backseat of his sister’s Mercury Grand Marquis. The metronomic ticking of tires against scored pavement penetrated the pharmaceutical fog, and he pushed up on his forearms to look out the window. They were speeding along the interstate that flatlined across the Black Belt of southern Mississippi.

“You slept good,” said Sally. He caught her anxious glance in the rearview mirror. He raised himself up until he could see his own reflection. There were dark circles under his eyes, and his jawline was shadowed with stubble, his thick brown hair matted. He still had on the black and gold Vanderbilt sweatshirt his sister had found in a chest of drawers in his apartment in New York and brought to the hospital for him to wear on the trip. It was a present Emily had gotten him for his birthday.

“How close are we?” Carter asked.

“Just north of Meridian,” said Sally. “We’re almost home. Go back to sleep if you want.”

He stretched and looked around. One leg was still numb, and his back muscles were tight from the long ride south. He felt thirsty but was too weak to open the ice chest on the floorboard beside him to see if there were Cokes inside. Instead he retrieved the pillow he had been resting his head on, gathered it up close to his chest, and sank into the backseat vinyl to stare out the window. The medication made his throat dry and his brain furry. Nausea overcame him as a profound agitation blossomed again in his stomach.

“Sally, what’s going on?” he said. He leaned forward and placed his forehead against the seat back, turning slightly to squint through the glare of the side window at the barren Mississippi landscape whizzing by.

“You passed out in the newsroom, remember?” Sally spoke in a conscientiously neutral tone, as if she were describing the weather.

Carter stared out at the scrub pine, the red clay, and the heavy equipment of highway construction, trying to focus on what his sister was saying.

“You were in the hospital a few days but checked yourself out. Your editor, Mr. Dennehy, offered you some time off, but you insisted on returning to work.” Carter had not missed a deadline for a couple of weeks. Then, Sally explained, one day he did not show up for work or answer the phone. His colleague Gelman found his bicycle unlocked on the stoop. When Gelman’s knock on the door got no answer, he called a couple of his police buddies and they broke in. “They found you passed out on the floor in your bedroom and took you back to the hospital,” Sally said. “The doctor said it was nervous exhaustion and malnutrition.” She hesitated. “He also mentioned symptoms of post-traumatic stress disorder.”

Carter looked back into the rearview mirror, knowing his sister would be watching for his reaction. He felt a jab of indignation. “Fuck that,” he said under his breath. The thought that his condition might have a diagnosis made him feel even worse.

When he surfaced again from a dreamless highway slumber, the car was stopped at a gas station. He could see Sally inside paying. She returned with some peanuts and Nabs and seemed grateful when he tore them open. Back on the road, Carter sipped a Coke and looked out on the increasingly familiar landscape. He sat up fully for the first time. “This is a bad idea, Sally.”

“You don’t need to be by yourself, Carter,” Sally said with a quiet finality.

“You should have left me in the loony bin,” he said.

Sally said, “Ashland is not a loony bin.”

The last time Carter had been back to his hometown of Troy, Mississippi, was a couple of years earlier, when he had taken Josh and Emily on the grand Southern tour. They spent one night in Troy. Carter had seldom returned since his mother died ten years before and he had left the Atlanta paper and moved to New York. On the rare occasions he visited, he had calculated to a science the length of time he and his father could spend under the same roof. Forty-eight hours, max, before one of them uttered the words I have to take a walk.

“You need to rest, Carter. You need to be around people who love you and can take care of you.”

“But I’ve got a life, Sal. Responsibilities. I’ve got deadlines—”

“Dennehy said he could manage without you for a while.”

As much as Carter cringed at the thought of recuperating in Troy, he knew that once Sally had set a plan in motion, she saw it through. She offered him a bit of her Hershey bar.

“Daddy’s excited you’re coming, Pross,” Sally said. Pross, short for Prosecutor, was a pet name his father called him when he was a boy. The name remained current among only a handful of people.

“Not bad for a seventy-year-old.” Since retiring from the federal bench for health reasons, their father had rallied and returned to his law practice. “The firm’s having a fortieth anniversary party in a few weeks,” Sally said. “Don’t tell Daddy, but the new connector’s going to be named after him. The Mitchell T. Ransom Expressway.”

Sally laughed. “You can come to the party if you feel up to it.”

Carter forced a smile. “I don’t know how you take care of him.”

“Oh, he’s no bother. He’s dialed it back a lot in recent years. You’ll be surprised. He’s a good grandfather to Willie, and Willie’s devoted to him.” Sally’s ex, a tax lawyer, had run off with his paralegal when Sally was pregnant with their now six-year-old son. “Besides,” she continued, “when you’re a bookseller in a town that doesn’t read, having no house payment is a godsend.”

“Thought of hiring a nurse?”

Sally had turned on her signal and was moving into the right lane. Carter felt an involuntary pang of love/hate when he saw the green exit sign, troy historic district.

“How’s business, Sally?” He knew how hard it was for her to be away from the shop. And although she would never complain, he felt guilty for being the reason she had to take off.

“Could be worse. The town’s changed considerably. You’re not going to recognize it.”

“The college is Troy University now, you know. Our generation’s finally grown up and taken over. The mayor’s black, and a couple of council members. There’s even an artists’ collective in Troy.”

“Ah, Mississippi. Where they write more books than they read.”

The conversation had exhausted Carter. He reclined in the seat. Sally had turned off the interstate onto old U.S. Highway 17, the narrow two-lane blacktop that was the only route north out of town in his youth, before the interstate. It was the road he had traveled with his family on vacations, with his basketball team to games in Meridian or Columbus, with church groups to gospel sings in Jackson, and it was the road that took him away from home to college and law school back when the future had seemed knowable.

Except for a few stray billboards promoting products and companies that had not existed in the 1960s, the scenery along the highway remained much as it was during his boyhood—a corridor of unbroken green cutting through incipient hills of pine forest, giving way occasionally to sunbaked farmland, open fields of soybean, corn, and watermelon, or pastures occupied by melancholy herds of humidity-stunned cattle. The relentless sun seemed to have drained the fields of all vitality and through some perverse photosynthesis transmuted an excess of chlorophyll to the lush kudzu, which crept up guy wires and draped telephone poles.

The highway grew clotted with slow-moving trucks hauling lumber, forcing an adjustment of speed and expectation for miles before one reached the city limits, as if returning to Troy required a slowing of metabolism to the velocity of molasses. As they passed the old Troy Casket Company and its sprawling new facility, Carter caught his first whiff of the changes that had come to his hometown. The company’s whimsical contemporary logo seemed suited more to a wine emporium in Jackson than to the sides of the parked trucks that would deliver their sad cargo all over the Southeast.

“Lige has been in town a lot campaigning for reelection,” Sally said as they pulled into view of the town square. “I’m sure he’ll be coming by to see you.”

In Mississippi the past had a way of superimposing itself on the present, and Carter experienced that familiar twinning of realities as he made out the old Kress’s logo bleeding through the whitewashed brick on the building rising before them: a personal landmark. It was now abandoned, a sign on its soaped windows announcing its next tenant, an organic foods market.

As they circled the courthouse, Sally said, “Look, Pross. See anything different?” She pointed toward the street on the south end of the square. Carter scanned the intersection he had known so well as a child, and he spotted the statue erected on a traffic island in the distance, a small cast-bronze figure of a man with one hand lifted heavenward in a gesture of command. “Guess who that is.”

“The Imperial Wizard of the Ku Klux Klan.”

Sally laughed and groaned. “Oh, Lord, it’s going to be a long convalescence. No, it’s Hugh. Remember how he used to direct traffic in front of the Starlite Cafe?”

Hugh Renfro, the retarded son of a respected local physician, had been a well-known town character, sort of like a gregarious Boo Radley. Hugh was always engaging drivers and pedestrians on the streets in conversation and speaking for the most part in rhyme. “Hey, pretty girl in your new spring dress, I’ll ask you to marry me and hope you’ll say yes.”

“Hugh got hit by a pulpwood truck a couple of years ago,” Sally said. “The whole town turned out for his funeral. The city council voted to put up a statue to him, and I think Dad kicked in some money. They even commissioned the sculpture in Memphis.”

Carter took a slow, deep breath. Troy had been the birthplace of at least two world-class athletes—an Olympic runner and a pro football great—as well as a famous mezzo-soprano with the Metropolitan Opera. But those local achievers were black, and it had been decades before the hometown named streets after them—in the historically black district. When the city finally got around to erecting a statue to a native of distinction, it was to a certifiable idiot, who happened to be white.