Traveling to the mountains of 1929 North Carolina to forge a timber business with her new husband, Serena Pemberton champions her mastery of harsh natural and working conditions but turns murderous when she learns she cannot bear children. 25,000 first printing.

December 3, 2008 • When Pemberton returned to the North Carolina mountains after three months in Boston settling his father's estate... 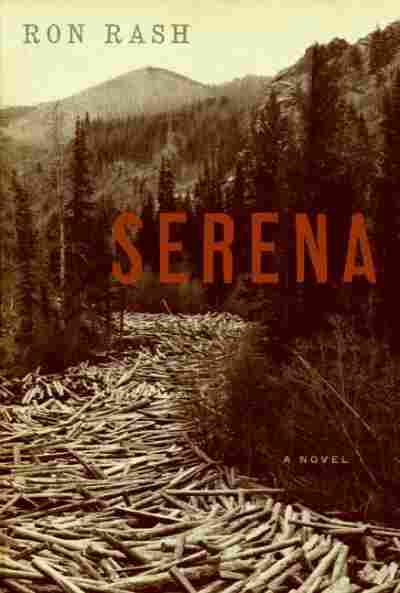 When Pemberton returned to the North Carolina mountains after three months in Boston settling his father's estate, among those waiting on the train platform was a young woman pregnant with Pemberton's child. She was accompanied by her father, who carried beneath his shabby frock coat a bowie knife sharpened with great attentiveness earlier that morning so it would plunge as deep as possible into Pemberton's heart.

The conductor shouted "Waynesville" as the train shuddered to a halt. Pemberton looked out the window and saw his partners on the platform, both dressed in suits to meet his bride of two days, an unexpected bonus from his time in Boston. Buchanan, ever the dandy, had waxed his mustache and oiled his hair. His polished bluchers gleamed, the white cotton dress shirt fresh-pressed. Wilkie wore a gray fedora, as he often did to protect his bald pate from the sun. A Princeton Phi Beta Kappa key glinted on the older man's watch fob, a blue silk handkerchief tucked in his breast pocket.

Pemberton opened the gold shell of his watch and found the train on time to the exact minute. He turned to his bride, who'd been napping. Serena's dreams had been especially troubling last night. Twice he'd been waked by her thrashing, her fierce latching onto him until she'd fallen back asleep. He kissed her lightly on the lips and she awoke.

"Not the best place for a honeymoon."

"It suits us well enough," Serena said, leaning into his shoulder. "We're here together, which is all that matters."

Pemberton inhaled the bright aroma of Tre Jur talcum and remembered how he'd not just smelled but tasted its vividness on her skin earlier that morning. A porter strolled up the aisle, whistling a song Pemberton didn't recognize. His gaze returned to the window.

Next to the ticket booth Harmon and his daughter waited, Harmon slouching against the chestnut board wall. It struck Pemberton that males in these mountains rarely stood upright. Instead, they leaned into some tree or wall whenever possible. If none was available they squatted, buttocks against the backs of their heels. Harmon held a pint jar in his hand, what remained of its contents barely covering the bottom. The daughter sat on the bench, her posture upright to better reveal her condition. Pemberton could not recall her first name. He wasn't surprised to see them or that the girl was with child. His child, Pemberton had learned the night before Pemberton and Serena left Boston. Abe Harmon is down here saying he has business to settle with you, business about his daughter, Buchanan had said when he called. It could be just drunken bluster, but I thought you ought to know.

"Our welcoming party includes some of the locals," Pemberton said to his bride.

"As we were led to expect," Serena said.

She placed her right hand on his wrist for a moment, and Pemberton felt the calluses on her upper palm, the plain gold wedding band she wore in lieu of a diamond. The ring was like his in every detail except width. Pemberton stood and retrieved two grips from the overhead compartment. He handed them to the porter, who stepped back and followed as Pemberton led his bride down the aisle and the steps to the platform. There was a gap of two feet between the steel and wood. Serena did not reach for his hand as she stepped onto the planks.

Buchanan caught Pemberton's eye first, gave him a warning nod toward Harmon and his daughter before acknowledging Serena with a stiff formal bow. Wilkie took off his fedora. At five-nine, Serena stood taller than either man, but Pemberton knew other aspects of Serena's appearance helped foster Buchanan and Wilkie's obvious surprise—pants and boots instead of a dress and cloche hat, sun-bronzed skin that belied Serena's social class, lips and cheeks untinted by rouge, hair blonde and thick but cut short in a bob, distinctly feminine yet also austere.

Serena went up to the older man and held out her hand. Though he was, at seventy, over twice her age, Wilkie stared at Serena like a smitten schoolboy, the fedora pressed against his sternum as if to conceal a heart already captured.

Wilkie fumbled with his hat a moment before freeing his right hand and shaking Serena's.

"And Buchanan," Serena said, turning to the other partner. "Correct?"

Buchanan took her proffered hand and cupped it awkwardly in his.

Pemberton watched with amusement as Buchanan corrected his grip, quickly withdrew his hand. In the year that Boston Lumber Company had operated in these mountains, Buchanan's wife had come only once, arriving in a pink taffeta gown that was soiled before she'd crossed Waynesville's one street and entered her husband's house. She'd spent one night and left on the morning train. Now Buchanan and his wife met once a month for a weekend in Richmond, as far south as Mrs. Buchanan would travel. Wilkie's wife had never left Boston.

Pemberton's partners appeared incapable of further speech. Their eyes shifted to the leather chaps Serena wore, the beige oxford shirt and black jodhpurs. Serena's proper diction and erect carriage confirmed that she'd attended finishing school in New En-gland, as had their wives. But Serena had been born in Colorado and lived there until sixteen, child of a timber man who'd taught his daughter to shake hands firmly and look men in the eye as well as ride and shoot. She'd come east only after her parents' deaths.

The porter laid the grips on the platform and walked back toward the baggage car that held Serena's Saratoga trunk and Pemberton's smaller steamer trunk.

"I assume Campbell got the Arabian to camp," Pemberton said.

"Yes," Buchanan said, "though it nearly killed young Vaughn. That horse isn't just big but quite spirited, ‘cut proud' as they say."