The Pulitzer Prize-winning journalist brings together an oral history of the American Dust Bowl that devastated the Great Plains during the Great Depression, following several families and their communities through the rise and fall of the region and their desperate struggle to persevere despite the devastation. Reader's Guide available. Reprint.

December 4, 2006 • Timothy Egan is the author of the book The Worst Hard Time: The Untold Story of Those Who Survived the Great American Dust Bowl. Now out in paperback, the book was awarded the National Book Award for nonfiction. Egan is a national enterprise reporter for the New York Times, and was part of the team that won a Pulitzer Prize in 2001 for a series on race in America.

January 8, 2006 • During the Great Depression, many people fled the drought-stricken region that stretched from Nebraska to the Texas panhandle. The struggles of those who stayed are the subject of a book by New York Times reporter Timothy Egan. 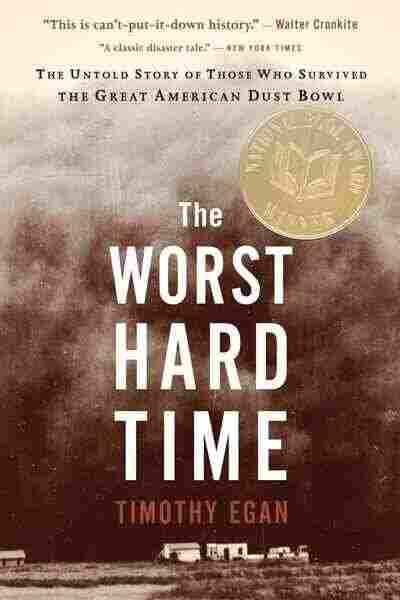 
They had been on the road for six days, a clan of five bouncing along in a
tired wagon, when Bam White woke to some bad news. One of his horses
was dead. It was the nineteenth-century equivalent of a flat tire, except this
was the winter of 1926. The Whites had no money. They were moving from
the high desert chill of Las Animas, Colorado, to Littlefield, Texas, south of
Amarillo, to start anew. Bam White was a ranch hand, a lover of horses and
empty skies, at a time when the cowboy was becoming a museum piece in
Texas and an icon in Hollywood. Within a year, Charles Lindbergh would
cross the ocean in his monoplane, and a white man in blackface would
speak from the screen of a motion picture show. The great ranches had been
fenced, platted, subdivided, upturned, and were going out to city builders, oil
drillers, and sodbusters. The least-populated part of Texas was open for
business and riding high in the Roaring Twenties. Overnight, new towns were
rising, bustling with banks, opera houses, electric streetlights, and
restaurants serving seafood sent by train from Galveston.With his handlebar
mustache, bowlegs, and raisin-skinned face, Bam White was a man high-
centered in the wrong century. The plan was to get to Littlefield, where the
winters were not as bad as Colorado, and see if one of the new fancy-
pantsers might need a ranch hand with a quick mind. Word was, a family
could always pick cotton as well.
Now they were stuck in No Man's Land, a long strip of geographic
afterthought in the far western end of the Oklahoma Panhandle, just a sneeze
from Texas. After sunrise, Bam White had a talk with his remaining horses.
He checked their hooves, which were worn and uneven, and looked into their
eyes, trying to find a measure of his animals. They felt bony to the touch,
emaciated by the march south and dwindling rations of feed. The family was
not yet halfway into their exodus. Ahead were 209 miles of road over the
high, dry roof of Texas, across the Canadian river, bypassing dozens of
budding Panhandle hamlets: Wildorado, Lazbuddie, Flagg, Earth, Circle,
Muleshoe, Progress, Circle Back.
If you all can give me another two or three days, White told his
horses, we'll rest you good. Get me to Amarillo, at least.
Bam's wife, Lizzie, hated the feel of No Man's Land. The chill,
hurried along by the wind, made it impossible to stay warm. The land was so
threadbare. It was here that the Great Plains tilted, barely susceptible to
most eyes, rising to nearly a mile above sea level at the western edge. The
family considered dumping the organ, their prized possession. They could
sell it in Boise City and make just enough to pick up another horse. They
asked around: ten dollars was the going rate for an heirloom organ — not
enough to buy a horse. Anyway, Bam White could not bring himself to give it
up. Some of the best memories, through the hardest of years, came with
music pumped from that box. They would push on to Texas, twenty miles
away, moving a lot slower. After burying their dead horse, they headed south.
Through No Man's Land, the family wheeled past fields that had
just been turned, the grass upside down. People in sputtering cars roared by,
honking, hooting at the cowboy family in the horse-drawn wagon, churning up
dust in their faces. The children kept asking if they were getting any closer to
Texas and if it would look different from this long strip of Oklahoma. They
seldom saw a tree in Cimarron County. There wasn't even grass for the horse
team; the sod that hadn't been turned was frozen and brown. Windmills
broke the plain, next to dugouts and sod houses and still-forming villages.
Resting for a long spell at midday, the children played around a buffalo
wallow, the ground mashed. Cimarron is a Mexican hybrid word, descended
from the Apache who spent many nights in these same buffalo wallows. It
means "wanderer."