Women And the Rise of Raunch Culture

Examines how some women are promoting chauvinism by behaving in sexually compromising ways, in an account that evaluates how women may be contributing to misogynistic and stereotyped belief systems.

November 28, 2006 • Ariel Levy is a contributing editor at New York magazine, where she writes about sexuality, culture and gender politics. Her new book is Female Chauvinist Pigs: Women and the Rise of Raunch Culture. One reviewer writes that Levy "strips the 'Girls Gone Wild' culture of its cuteness in her provocative [book], arguing that post-feminist poster girls such as Playboy Bunnies offer only faux empowerment." 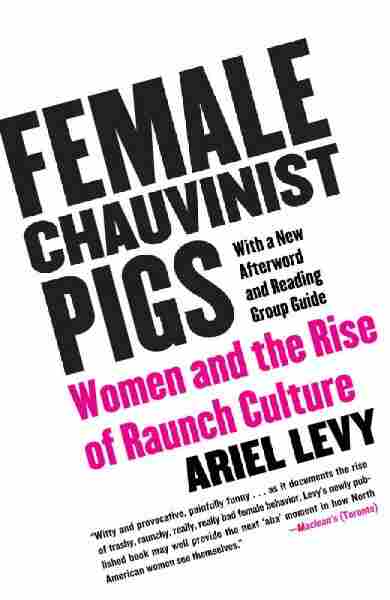 I first noticed it several years ago. I would turn on the television and find strippers in pasties explaining how best to lap dance a man to orgasm. I would flip the channel and see babes in tight, tiny uniforms bouncing up and down on trampolines. Britney Spears was becoming increasingly popular and increasingly unclothed, and her undulating body ultimately became so familiar to me I felt like we used to go out.

Charlie's Angels, the film remake of the quintessential jiggle show, opened at number one in 2000 and made $125 million in theaters nationally, reinvigorating the interest of men and women alike in leggy crime fighting. Its stars, who kept talking about "strong women" and "empowerment," were dressed in alternating soft-porn styles — as massage parlor geishas, dominatrixes, yodeling Heidis in alpine bustiers. (The summer sequel in 2003 — in which the Angels' perilous mission required them to perform stripteases — pulled in another $100 million domestically.) In my own industry, magazines, a porny new genre called the Lad Mag, which included titles like Maxim, FHM, and Stuff, was hitting the stands and becoming a huge success by delivering what Playboy had only occasionally managed to capture: greased celebrities in little scraps of fabric humping the floor.

Some odd things were happening in my social life, too. People I knew (female people) liked going to strip clubs (female strippers). It was sexy and fun, they explained; it was liberating and rebellious. My best friend from college, who used to go to Take Back the Night marches on campus, had become captivated by porn stars. She would point them out to me in music videos and watch their (topless) interviews on Howard Stern. As for me, I wasn't going to strip clubs or buying Hustler T-shirts, but I was starting to show signs of impact all the same. It had only been a few years since I'd graduated from Wesleyan University, a place where you could pretty much get expelled for saying "girl" instead of "woman," but somewhere along the line I'd started saying "chick." And, like most chicks I knew, I'd taken to wearing thongs.

What was going on? My mother, a shiatsu masseuse who attended weekly women's consciousness-raising groups for twenty-four years, didn't own makeup. My father, whom she met as a student radical at the University of Wisconsin, Madison, in the sixties was a consultant for Planned Parenthood, NARAL, and NOW. Only thirty years (my lifetime) ago, our mothers were "burning their bras" and picketing Playboy, and suddenly we were getting implants and wearing the bunny logo as supposed symbols of our liberation. How had the culture shifted so drastically in such a short period of time?

What was almost more surprising than the change itself were the responses I got when I started interviewing the men and — often — women who edit magazines like Maxim and make programs like The Man Show and Girls Gone Wild. This new raunch culture didn't mark the death of feminism, they told me; it was evidence that the feminist project had already been achieved. We'd earned the right to look at Playboy; we were empowered enough to get Brazilian bikini waxes. Women had come so far, I learned, we no longer needed to worry about objectification or misogyny. Instead, it was time for us to join the frat party of pop culture, where men had been enjoying themselves all along. If Male Chauvinist Pigs were men who regarded women as pieces of meat, we would outdo them and be Female Chauvinist Pigs: women who make sex objects of other women and of ourselves.

When I asked female viewers and readers what they got out of raunch culture, I heard similar things about empowering miniskirts and feminist strippers, and so on, but I also heard something else. They wanted to be "one of the guys"; they hoped to be experienced "like a man." Going to strip clubs or talking about porn stars was a way of showing themselves and the men around them that they weren't "prissy little women" or "girly-girls." Besides, they told me, it was all in fun, all tongue-in-cheek, and for me to regard this bacchanal as problematic would be old-school and uncool.

Despite the rising power of Evangelical Christianity and the political right in the United States, this trend has only grown more extreme and more pervasive in the years that have passed since I first became aware of it. A tawdry, tarty, cartoonlike version of female sexuality has become so ubiquitous, it no longer seems particular. What we once regarded as a kind of sexual expression we now view as sexuality. As former adult film star Traci Lords put it to a reporter a few days before her memoir hit the best-seller list in 2003, "When I was in porn, it was like a back-alley thing. Now it's everywhere." Spectacles of naked ladies have moved from seedy side streets to center stage, where everyone — men and women — can watch them in broad daylight. Playboy and its ilk are being "embraced by young women in a curious way in a postfeminist world," to borrow the words of Hugh Hefner.

But just because we are post doesn't automatically mean we are feminists. There is a widespread assumption that simply because my generation of women has the good fortune to live in a world touched by the feminist movement, that means everything we do is magically imbued with its agenda. It doesn't work that way. "Raunchy" and "liberated" are not synonyms. It is worth asking ourselves if this bawdy world of boobs and gams we have resurrected reflects how far we've come, or how far we have left to go.