Accessibility links
Nixonland NPR coverage of Nixonland: The Rise of a President and the Fracturing of America by Rick Perlstein. News, author interviews, critics' picks and more.

The Rise of a President and the Fracturing of America

An account of the thirty-seventh presidency sets Nixon's administration against a backdrop of the tumultuous civil rights movement while offering insight into how key events in the 1960s set the stage for today's political divides, in a chronicle that documents such events as the Watts riots and Nixon's landslide reelection. 60,000 first printing.

November 26, 2008 • The events of 2008 raised a raft of controversies to national consciousness. These powerful books wrap the issues in compelling narratives — and provide the perspective of history.

A Nation Divided In 'Nixonland'

August 21, 2008 • Rick Perlstein's book, Nixonland, combines an evocative trip through the 1960s and early 1970s with an assessment of the impact of Richard Nixon's political career. Perstein argues that many of the deep political divisions in modern American politics were defined by that period, and exploited effectively by Nixon.

A Nation Divided In 'Nixonland'

May 21, 2008 • In 1964, Democrat Lyndon Johnson won the presidency in a landslide victory; eight years later, Republican president Richard Nixon was reelected in an equally lopsided race. In his new book, Nixonland, historian Rick Perlstein looks at the chaotic years between those elections.

May 21, 2008 • Perlstein appears interested, not angry, with Nixon's colossal influence on American politics. 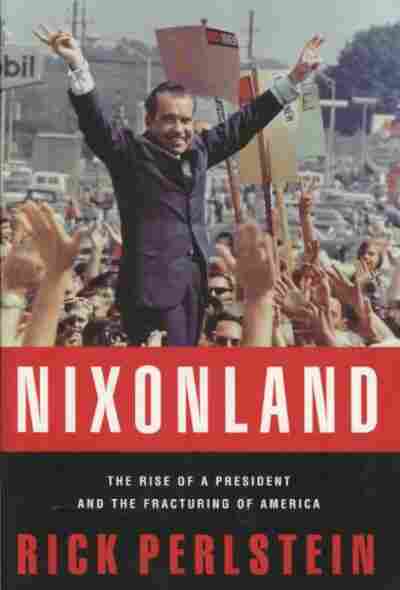 In 1964, the Democratic presidential candidate Lyndon B. Johnson won practically the biggest landslide in American history, with 61.05 percent of the popular vote and 486 of 538 electoral college votes. In 1972, the Republican presidential candidate Richard M. Nixon won a strikingly similar landslide — 60.67 percent and 520 electoral college votes. In the eight years in between, the battle lines that define our culture and politics were forged in blood and fire. This is a book about how that happened, and why.

At the start of 1965, when those eight years began, blood and fire weren't supposed to be a part of American culture and politics. According to the pundits, America was more united and at peace with itself than ever. Five years later, a pretty young Quaker girl from Philadelphia, a winner of a Decency Award from the Kiwanis Club, was cross-examined in the trial of seven Americans charged with conspiring to start a riot at the 1968 Democratic National Convention.

"You practice shooting an M1 yourself, don't you?" the prosecutor asked her.

"You also practice karate, don't you?"

"That is for the revolution, isn't it?"

"After Chicago I changed from being a pacifist to the realization that we had to defend ourselves. A nonviolent revolution was impossible. I desperately wish it was possible."

And, several months after that, an ordinary Chicago ad salesman would be telling Time magazine, "I'm getting to feel like I'd actually enjoy going out and shooting some of these people. I'm just so goddamned mad. They're trying to destroy everything I've worked for — for myself, my wife, and my children."

This American story is told in four sections, corresponding to four elections: in 1966, 1968, 1970, and 1972. Politicians, always reading the cultural winds, make their life's work convincing 50 percent plus one of their constituency that they understand their fears and hopes, can honor and redeem them, can make them safe and lead them toward their dreams. Studying the process by which a notably successful politician achieves that task, again and again, across changing cultural conditions, is a deep way into an understanding of those fears and dreams — and especially, how those fears and dreams change.

The crucial figure in common to all these elections was Richard Nixon — the brilliant and tormented man struggling to forge a public language that promised mastery of the strange new angers, anxieties, and resentments wracking the nation in the 1960s. His story is the engine of this narrative. Nixon's character — his own overwhelming angers, anxieties, and resentments in the face of the 1960s chaos — sparks the combustion. But there was nothing natural or inevitable about how he did it — nothing inevitable in the idea that a president could come to power by using the angers, anxieties, and resentments produced by the cultural chaos of the 1960s. Indeed, he was slow to the realization. He reached it, through the 1966 election, studying others: notably, Ronald Reagan, who won the governorship of California by providing a political outlet for the outrages that, until he came along to articulate them, hadn't seemed like voting issues at all. If it hadn't been for the shocking defeats of a passel of LBJ liberals blindsided in 1966 by a conservative politics of "law and order," things might have turned out differently: Nixon might have run on a platform not too different from that of the LBJ liberals instead of one that cast them as American villains.

Nixon's win in 1968 was agonizingly close: he began his first term as a minority president. But the way he achieved that narrow victory seemed to point the way toward an entire new political alignment from the one that had been stable since FDR and the Depression. Next, Nixon bet his presidency, in the 1970 congressional elections, on the idea that an "emerging Republican majority" — rooted in the conservative South and Southwest, seething with rage over the destabilizing movements challenging the Vietnam War, white political power, and virtually every traditional cultural norm — could give him a governing majority in Congress. But when Republican candidates suffered humiliating defeats in 1970, Nixon blamed the chicanery of his enemies: America's enemies, he had learned to think of them. He grew yet more determined to destroy them, because of what he was convinced was their determination to destroy him.

Millions of Americans recognized the balance of forces in the exact same way — that America was engulfed in a pitched battle between the forces of darkness and the forces of light. The only thing was: Americans disagreed radically over which side was which. By 1972, defining that order of battle as one between "people who identified with what Richard Nixon stood for" and "people who despised what Richard Nixon stood for" was as good a description as any other.

The main character in Nixonland is not Richard Nixon. Its protagonist, in fact, has no name — but lives on every page. It is the voter who, in 1964, pulled the lever for the Democrat for president because to do anything else, at least that particular Tuesday in November, seemed to court civilizational chaos, and who, eight years later, pulled the lever for the Republican for exactly the same reason.