Prophetic poet Walt Whitman presides over each interlinked episode in a visionary novel set in the city of New York, featuring the same group of characters—a young boy, an older man, and a young woman.

November 27, 2006 • Michael Cunningham is the author of five novels and one non-fiction book. His most recent novel, Specimen Days, weaves the lives of three characters with the life of Walt Whitman. Cunningham won the 1999 Pulitzer Prize for Fiction and the PEN/Faulkner Award for his 1999 novel The Hours. 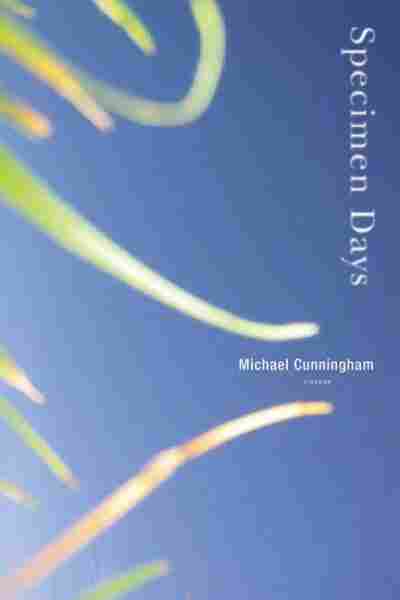 Chapter One
Walt said that the dead turned into grass, but there was no grass where they'd buried Simon. He was with the other Irish on the far side of the river, where it was only dirt and gravel and names on stones.

Catherine believed Simon had gone to heaven. She had a locket with his picture and a bit of his hair inside.

"Heaven's the place for him," she said. "He was too good for this world." She looked uncertainly out the parlor window and into the street, as if she expected a glittering carriage to wheel along with Simon on board, serene in his heedless milk-white beauty, waving and grinning, going gladly to the place where he had always belonged.

"If you think so," Lucas answered. Catherine fingered the locket. Her hands were tapered and precise. She could sew stitches too fine to see.

"And yet he's with us still," she said. "Don't you feel it?" She worried the locket chain as if it were a rosary.

"I suppose so," Lucas said. Catherine thought Simon was in the locket, and in heaven, and with them still. Lucas hoped she didn't expect him to be happy about having so many Simons to contend with.

The guests had departed, and Lucas's father and mother had gone to bed. It was only Lucas and Catherine in the parlor, with what had been left behind. Empty plates, the rind of a ham. The ham had been meant for Catherine's and Simon's wedding. It was lucky, then, to have it for the wake instead.

He hadn't meant to speak as the book. He never did, but when he was excited he couldn't help himself.

His heart fluttered and thumped against the bone.

"It's a terrible place. It's such hard work."

"And no more school."

"You know the whole thing, don't you?"

"Oh no. There's much more, it will take me years."

"You must be careful at the works," she said. "You must--" She stopped speaking, though her face didn't change. She continued offering her profile, which was as gravely beautiful as that of a woman on a coin. She continued looking out at the street below, waiting for the heavenly entourage to parade by with Simon up top, the pride of the family, a new prince of the dead.

Lucas said, "You must be careful, too."

"There's nothing for me to be careful about, my dear. For me it's just tomorrow and the next day."

She slipped the locket chain back over her head. The locket vanished into her dress. Lucas wanted to tell her--what? He wanted to tell her that he was inspired and vigilant and recklessly alone, that his body contained his unsteady heart and something else, something he felt but could not describe: porous and spiky, shifting with flecks of thought, with urge and memory; salted with brightness, flickerings of white and green and pale gold, like stars; something that loved stars because it was made of the same substance. He needed to tell her it was impossible, it was unbearable, to be so continually mistaken for a misshapen boy with a walleye and a pumpkin head and a habit of speaking in fits.

He said, "I celebrate myself, and what I assume you shall assume." It was not what he'd hoped to tell her.

She smiled. At least she wasn't angry with him. She said, "I should go now. Will you walk me home?"


Outside, on the street, Catherine slipped her hand into the crook of his elbow. He tried to steady himself, to stride manfully, though what he wanted most was to stop striding altogether, to rise up like smoke and float above the street, which was filled with its evening people, workingmen returning, newsboys hawking their papers. Mad Mr. Cain paced on his corner, dressed in his dust-colored coat, snatching distractedly at whatever crawled in his beard, shouting, "Mischief, gone and forgotten, what have ye done with the shattered hearts?" The street was full of its smell, dung and kerosene, acrid smoke--something somewhere was always burning. If Lucas could rise out of his body, he would become what he saw and heard and smelled. He would gather around Catherine as the air did, touch her everywhere. He would be drawn into her when she breathed.

He said, "The smallest sprout shows there is really no death."

"Just as you say, my dear," Catherine said.

A newsboy shouted, "Woman brutally murdered, read all about it!" Lucas thought he could be a newsboy, but the pay was too low, and he couldn't be trusted to call the news, could he? He might lose track of himself and walk the streets shouting, "Every atom belonging to me as good belongs to you." He'd do better at the works. If the impulse overcame him, he could shout into Simon's machine. The machine wouldn't know or care, any more than Simon had.

Catherine didn't speak as they walked. Lucas forced himself to remain silent as well. Her building was three blocks to the north, on Fifth Street. He walked her up onto the stoop, and they stood there a moment together, before the battered door.

Catherine said, "Here we are."

A cart rolled by with a golden landscape painted on its side: two cows grazing among stunted trees and a third cow looking up at the name of a dairy, which floated in the golden sky. Was it meant to be heaven? Would Simon want to be there? If Simon went to heaven and it proved to be a field filled with reverent cows, which Simon would he be when he got there? Would he be the whole one, or the crushed?

A silence gathered between Lucas and Catherine, different from the quiet in which they'd walked. It was time, Lucas thought, to say something, and not as the book. He said, "Will you be all right?"

She laughed, a low murmuring laugh he felt in the hairs on his forearms. "It is I who should ask you that question. Will you be all right?"

She glanced at a place just above Lucas's head and settled herself, a small shifting within her dark dress. It seemed for a moment as if her dress, with its high collar, its whisper of hidden silk, had a separate life. It seemed as if Catherine, having briefly considered rising up out of her dress, had decided instead to remain, to give herself back to her clothes.

"No, no. You are wonderful, you are beautiful."

She laughed again. He looked down at the stoop, noticed that it contained specks of brightness. Mica? He went briefly into the stone. He was cold and sparkling, immutable, glad to be walked on.

He hesitated. Catherine was well past twenty-five. It had been talked about when the marriage was announced, for Simon had been barely twenty. But she was not old in the way she meant. She was not soured or evacuated, she was not dimmed.

He said, "You are not guilty to me, nor stale nor discarded."

She put her fingertips to his cheek. "Sweet boy," she said.

"Of course you will. I shall be right here."

"But it will not be the same."

She waited to hear what he would say. He waited, too. If only the machine hadn't taken Simon. If only he, Lucas, were older and healthier, with a sounder heart. If only he could marry Catherine himself. If only he could leave his body and become the dress she wore.

A silence passed, and she kissed him. She put her lips on his.

When she withdrew he said, "The atmosphere is not a perfume, it has no taste of the distillation, it is odorless, it is for my mouth forever, I am in love with it."

She said, "You must go home and sleep now."

It was time to leave her. There was nothing more to do or say. Still, he lingered. He felt as he sometimes did in dreams, that he was on a stage before an audience, expected to sing or recite.

She turned, took her key from her reticule, put it in the lock. "Good night," she said.

He stepped down. From the sidewalk he said to her retreating form, "I am of old and young, of the foolish as much as the wise."

"Good night," she said again. And she was gone.


He didn't go home, though home was the rightful place for him. He went instead to Broadway, where the living walked.

Broadway was itself, always itself, a river of light and life that flowed through the shades and little fires of the city. Lucas felt, as he always did when he walked there, a queasy, subvert exaltation, as if he were a spy sent to another country, a realm of riches. He walked with elaborate nonchalance, hoping to be as invisible to others as they were visible to him.

On the sidewalk around him, the last of the shoppers were relinquishing the street to the first of the revelers. Ladies in dresses the color of pigeons' breasts, the color of rain, swished along bearing parcels, speaking softly to one another from under their feathered hats. Men in topcoats strode confidently, spreading the bleak perfume of their cigars, flashing their teeth, slapping the stone with their licorice boots. Carriages rolled by bearing their mistresses home, and the newsboys called out, "Woman murdered in Five Points, read all about it!" Red curtains billowed in the windows of the hotels, under a sky going a deeper red with the night. Somewhere someone played "Lilith" on a calliope, though it seemed that the street itself emanated music, as if by walking with such certainty, such satisfaction, the people summoned music out of the pavement.

If Simon was in heaven, it might be this. Lucas could imagine the souls of the departed walking eternally, with music rising from the cobblestones and curtains putting out their light. But would this be a heaven for Simon? His brother was (had been) loud and rampant, glad of his songs and his meals. What else had made him happy? He hadn't cared for curtains or dresses. He hadn't cared about Walt or the book. What had he wanted that this heaven could provide?

He said, "I am large, I contain multitudes." A man in a topcoat, passing by, glanced at him strangely, as people did. The man would be among the angels in Lucas's heaven, just as plump and prosperous as he was on earth, but in the next world he would not consider Lucas strange. In heaven, Lucas would be beautiful. He'd speak a language everyone understood.