A True Tale of Faith, Greed and Forgery in the Holy Land

In 2002, an ancient limestone box called the James Ossuary was trumpeted on front pages as the first material evidence of the existence of Jesus Christ. Today it is exhibit A in a forgery trial involving millions of dollars worth of high-end Biblical-era relics, which could lead to the incarceration of some very wealthy men and embarrass major international institutions, including the British Museum and Sotheby's. Set in Israel, with its 30,000 archaeological digs crammed with biblical-era artifacts, andfull of colorful characters—scholars, evangelicals, detectives, and millionaire collectors—this book tells the story of what Israeli authorities have called "the fraud of the century." It takes readers into the murky world of Holy Land relic dealing, from the back alleys of Jerusalem's Old City to New York's Fifth Avenue, and reveals biblical archaeology as it is pulled apart by religious believers on one side and scientists on the other.—From publisher description.

The 'Unholy Business' Of Biblical Forgeries

November 17, 2008 • In 2002, archaeologists claimed a box of ancient bones held the remains of Jesus' brother. Nina Burleigh discusses her book, Unholy Business: The True Tale of Faith, Greed and Forgery in the Holy Land, which explores how forgers create fake artifacts to "prove" Biblical stories to be true.

The 'Unholy Business' Of Biblical Forgeries 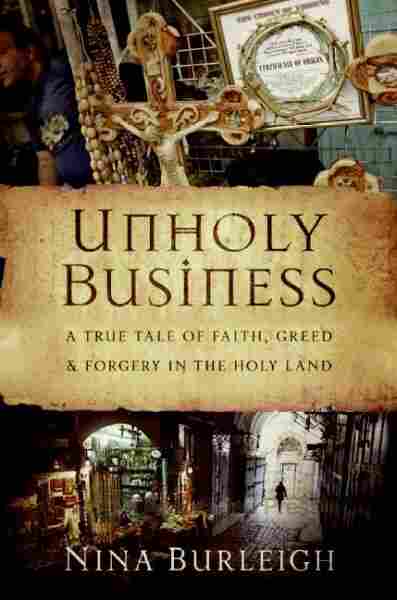 A True Tale of Faith, Greed and Forgery in the Holy Land

That's the stuff that dreams are made of.
—Humphrey Bogart as Sam Spade in The Maltese Falcon

At sunset, the collector and his lucky guests can't help but notice the primal kaleidoscope in the heavens above the Mediterranean Sea. Three walls of floor-to-ceiling penthouse glass front the westward horizon, and every afternoon shades of vermilion and violet, pink and indigo streak the sky and sea. Anyone witnessing the celestial display from this vantage point feels enriched, but the old man who owns the view, Shlomo Moussaieff, is in fact one of the world's richest men.

People tell two versions of how Moussaieff made his billions, with a twist depending on whether the teller likes or dislikes the old man. The nice version is that for four decades he sold pricey jewelry to oil sheiks from a tiny shop on the ground floor of London's glittery Hilton Hotel, and also knew the prostitutes they employed. The sheiks paid the girls in jewelry because they deemed it more honorable to give their "girlfriends" presents than to pay them hard cash. After these transactions, the unsentimental ladies rode the mirrored and gilt elevators downstairs and sold the jewelry back to Moussaieff, at prices far lower than what the sheiks had paid. Then Moussaieff sold the pieces again at full value. The nastier version of the story, told by men who think the old man has crossed them, is that the jeweler sold the sheiks precious jewelry and then the escorts stole the baubles and brought them back to the shop.

At eighty-five, Moussaieff's labyrinthine life story is made up of a thousand and one equally fantastic and unverifiable tales. As he tells it, an abusive rabbi father kicked him onto the streets of 1920s Jerusalem when he was a boy of twelve, so he slept in dank, ancient tombs on the Old City's edge with homeless Arab urchins, plucking his first Roman-era coins out of that hallowed dirt. He passed his teenage years lice ridden and deprived, sometimes sleeping rough in a synagogue where he overheard and memorized the Talmud, sometimes in an Arabic reform school memorizing the Koran, and sometimes in a Christian hospital. After fighting in Europe in World War II, he was briefly jailed by the Allies for attempting to smuggle valuable Judaica from synagogues the Nazis somehow hadn't plundered. He fought in the streets of Jerusalem's Old City during Israel's War of Independence, becoming friendly with general Moshe Dayan, another lover of antiquities. Together the men made forays into Gaza to acquire archaeological treasures. In London a few years later, he began amassing enormous wealth through intimacy with the world's richest Arab potentates. A stint in the Israeli Secret Ser-vice fits in somewhere. What is certain is that by the 1980s, he had created a colossal fortune from a jewelry business that landed him in the cosmopolitan upper echelon. One of his daughters is married to the president of Iceland.

These days, the old man spends less time making money and more time disbursing it to enlarge his vast collection of biblical antiquities. He doesn't care what people say about him, either. His only interest in life now, besides smoking and flirting, he says, is "proving the Bible true"—an odd pursuit for an avowedly unreligious man, but an offshoot of an early obsession with finding God. He believes completely in the historical reality of biblical characters, but Yahweh remains beyond his reach. The antiquities inside his Tel Aviv apartment would keep a team of museum curators busy for decades. Among them are a pair of three-foot-high iron lions from what was supposedly the Queen of Sheba's palace in Yemen, chunks of long-demolished Syrian Jewish temples on the walls, whole slabs of Assyrian cuneiform from Iraq, vitrines packed with pre-Canaanite pagan cult figurines, intact tile friezes taken from Roman baths in Israel. But these artifacts are only a small sampling of the six hundred thousand Bible-era relics he has collected over the years and that he stores in warehouses in Geneva and his London townhouse. Almost all of them, he readily admits, were removed illegally from their countries of origin.

Moussaieff's collection, quirks, and financial might are well understood among the antiquities traders in Israel. On most nights when Moussaieff is in Tel Aviv, a revolving cast of dealers and collectors drop in to sell, buy, or simply sip Diet Coke, enjoy the sunset over the sea, and watch the old man in action. His guests may also include socialites, politicians, and scholars who are attracted by the money, collection, and mystique of one of Israel's most intriguing characters. A dyslexic who can barely read, he is by turns profane and refined. He tells filthy jokes, veers between Hebrew and Arabic as the mood suits him, slyly calls men and women habibi—the Arabic word for sweetie—and will recite, eyes half-closed, bits of Holy Land arcana he has photographically memorized from the Bible and Koran. He can wax at length on the characters whose heads are commemorated on tarnished bits of Roman coins or the significance of clay figurines representing pre-Canaanite gods and goddesses.

On a balmy spring evening in 2002, an elfin fellow named Oded Golan joined a half-dozen other men at the billionaire's long rectangular table, inhaling the fumes of the great collector's chain-lit Marlboro Lights. Golan, fifty-something, short, with oddly shaped, fleshy ear tips, and a shiny brown mop of hair over an impish face reminiscent of Joel Grey in the movie Cabaret, was and still is one of Israel's biggest collectors of Bible-era relics. But his collection is tiny by comparison with Moussaieff's. Besides collecting Israeli artifacts, Golan—who came from a wealthy and accomplished Tel Aviv family and studied industrial design in college—ran an architectural tour business, speculated in real estate, and was an amateur classical pianist. His calloused, short fingers attested to the fact that he also used his hands and his design training to lovingly restore the ancient items he collected.