Journey to the Blue Moon

Journey to the Blue Moon

In Which Time Is Lost And Then Found Again

After losing his grandfather's pocket watch, Alex journeys to the Blue Moon, a place where earthlings search for lost items, where he meets a vast array of eccentric characters, some good and some bad, and gains a new perspective on the concept of time.

NPR stories about Journey to the Blue Moon

For Kids, Just Plain Fun Is a Comfort and a Joy

November 28, 2006 • What kid wouldn't like a comforting, joyful book for a holiday gift? A lot of 'em. For true holiday joy, make sure the books you give are truly enjoyable. Here are suggestions for different ages, stages and interests.

Excerpt: Journey To The Blue Moon 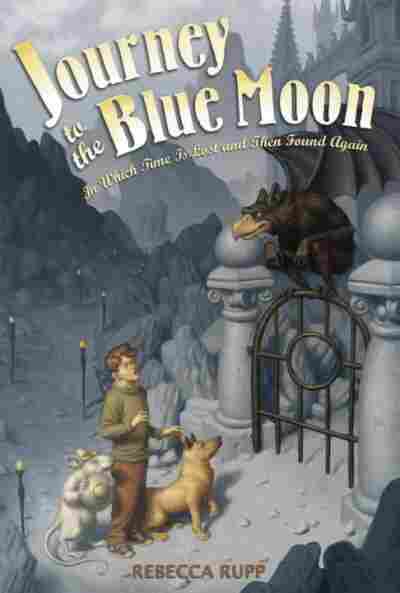 Alex sat down and found himself telling Lulu everything. For a talkative person, she was a surprisingly good listener. She pursed her lips as he explained, shook her head sadly when he recounted what his parents had said, nodded sympathetically in all the right places, and gave an excited little bounce in her seat when he described his lost pocket watch with its peculiar saying: Choose time or lose time.

"Why, that's your problem, dear, don't you see?" she cried brightly. "That's why everything's in such a tizzy. It went with the watch, you see. It happens all the time, dear, you mark my words. Why, we met a painter once who'd lost his perspective along with his paintbrush, and a sorry state he was in, and there was a whole troupe of acrobats who lost their balance when the laundry misplaced their leotards. You'll have to go and fetch it, of course, to set things back to rights, but that's only fair, and a valuable lesson learned. 'If it comes too easily, you won't appreciate it,' Selena says, and 'No gain without pain,' which used to drive me positively wild when I was a child, but she's quite right, you know, dear, quite right."

"I don't understand," Alex said. "What do you mean, go and fetch it? How can I fetch it? Fetch it from where?"

"Why, from the Moon, of course, dear," Lulu said, opening her eyes very wide. "That's where all lost things go. To the Moon. You just wait until it turns blue, which should be happening any night now, and then off you go. With a spot of luck, you find what you're after and back before morning, with no one the wiser. 'What they don't know won't hurt them,' that's what Selena used to say. She was a bit of a scamp in her younger days, though you'd never know it to hear her now."

She reached down, picked up the large black purse on the floor next to her chair, opened it, and began to root around inside. Alex glanced nervously toward the door. The Rabbity lady was clearly batty. What if she pulled out a knife or something? He hoped, if push came to shove, that he'd be able to outrun her, but on the other hand, he wasn't certain that he could. She looked pretty spry.

"The Moon turns blue?" he asked. Keep her talking, he thought. Surreptitiously he wiggled forward in his seat.

Lulu snapped the purse shut with an air of having found what she was looking for and sat up.

"Well, of course it does, dear. One of our visitors explained it all once. A lovely man, though a bit difficult to understand, to my way of thinking. Still, Selena seemed to follow him well enough, such a head for facts and figures she has, and perfectly comfortable with interdimensional transport and temporal translocation and all the rest of it. That's what the Blue is, dear; it's when the door opens up in space-time between us and them - or rather, us and you, that is - and when we begin to come into the Blue, that's when we can travel back and forth, see the sights, do a bit of shopping."

"Oh, mercy, there's no need to worry about that, dear, none at all," Lulu chirped, sitting up very straight in her chair. "There's ways and ways. Something turns up for everyone, if they're a likely candidate, that is, and you'd be amazed, my dear, amazed at what gets pressed into service, though all roads lead to Rome, in a matter of speaking, and it hardly matters once you get there, if you take my meaning."

Alex wasn't sure that he did, but he didn't get a chance to say so.

"Of course, it's not easy, dear," she said in a rapid whisper. "There's a lot out looking for time these days, in a manner of speaking, and some of them not at all nice. But you'll be all right if you pass time by and then pass through it. Can you remember that, dear? And you'll have to beware of Urd."

But the Rabbity lady had picked up her shopping bag, tucked her purse firmly under one arm, and was hastening toward the door.

"Well, dear, I must be going. It's been a pleasure chatting with you, but it's late, you know, and Selena gets huffy if I'm late. Still, when I explain, she'll be glad to hear that I could be of help. You just wait until it's full blue, mind, not a moment before, and then you've got three days more or less to do your hunting before the way goes shut. A bit like hide-and-seek, but with a prize at the end."

Just as she reached the door, she turned, hurried back to Alex, and pressed something into his hand.

"I was almost forgetting," she said. "You'll need that, dear. Just show it at the gate. I'd forget my head if it weren't screwed on tight - that's what Selena is always telling me. Now I really must dash. Best of luck, dear."

And with that, she was out the door at a run. Alex stood for a moment, staring at the floor where she had stood. The boards were powdered with glittery bluish dust.

Then slowly he opened his hand. He held a flat plastic token about the size of a fifty-cent piece. It was a dull silvery gray and had little ridges all around the edge, like a checker. On one side, in capital letters, it said: admit one.