Beginning his witness-protection job at a doughnut restaurant in the week before the 1980 presidential election, small-time thief Vince Camden finds himself unwittingly embroiled in a local politician's troubles, involved in a credit-card scam, and torn between relationships with a beautiful law clerk and a neurotic prostitute. Reprint. 20,000 first printing. 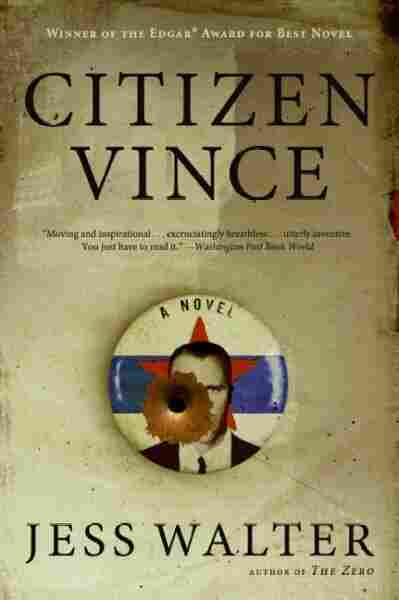 One day you know more dead people than live ones.

The thought greets Vince Camden as he sits up in bed, frantic, casting around a dark bedroom for proof of his existence and finding only props: nightstand, dresser, ashtray, clock. Vince breathes heavily. Sweats in the cool air. Rubs his eyes to shake the dust of these musings, not a dream exactly, this late-sleep panic — fine glass thin as paper, shattered and swirling, cutting as it blows away.

Vince Camden pops his jaw, leans over, and turns off the alarm just as the one, five, and nine begin their fall. Each morning at 1:59 he sits up like this and turns off the clock radio in the split second before two and the shrill blast of alarm. He wonders: How is a thing like that possible? And yet ... if you can manage such a trick — every morning waking up a few ticks before your alarm goes off — why couldn't you count all the dead people you know?

Start with Grandparents. Two sets. One grandfather had a second wife. That's five. Vince runs a toothbrush over his molars. Mother and father. Seven. Does a stillborn sister count? No. A person has to have been alive to be dead. By the time he finishes his shower, blow-dries his hair, and gets dressed — gray slacks, longsleeve black dress shirt, two buttons open — he's gone through family, neighbors, and former associates: already thirty-four people he knows to be dead. Wonders if that's high, if it's normal to know so many dead people.

Normal. That word tails him from a safe distance most days. He opens a drawer and pulls out a stack of forged credit cards, looks at the names on the cards: Thomas A. Spaulding. Lane Bailey. Margaret Gold. He imagines Margaret Gold's lovely normal life, a crocheted afghan tossed over the back of her sofa. How many dead people could Margaret Gold possibly know?

Vince counts out ten credit cards — including Margaret Gold's — and puts these in the pocket of his windbreaker. Fills the other pocket with Ziploc bags of marijuana. It's 2:16 in the morning when Vince slides his watch onto his wrist, careful not to catch the thick hair on his forearm. Oh yeah, Davie Lincoln — retarded kid used to carry money in his mouth while he ran errands for Coletti in the neighborhood. Choked on a half-dollar. Thirty-five.

Vince stands in the tiny foyer of his tiny house, if you can call a coatrack and a mail slot a foyer. Zips his windbreaker and snaps his cuffs out like a Vegas dealer leaving the table. Steps out into the world.

About Vince Camden: he is thirty-six and white. Single. Six feet tall, 160 pounds, broad-shouldered and thin, like a martini glass. Brown and blue, as the police reports have recorded his hair and eyes. His mouth curls at the right corner, thick eyebrows go their own way, and this casts his face in perpetual smirk, so that every woman who has ever been involved with him eventually arrives at the same expression, hands on hips, head cocked: Please. Be serious.

Vince is employed in midlevel management, food industry: baking division — donuts. Generally, there is less to making donuts than one might assume. But Vince likes it, likes getting to work at 4:30 in the morning and finishing before lunch. He feels as if he's gotten one over on the world, leaving his place of employment for lunch and simply not coming back. He's realizing this is a fixed part of his personality, this desire to get one over on the world. Maybe there is a hooky gene.

Outside, he pulls the collar of his windbreaker against his cheeks. Cold this morning: late October. Freezing, in fact — the steam leaks from his mouth and reminds him of an elementary school experiment with dry ice, which reminds him of Mr. Harlow, his fifth-grade teacher. Hanged himself after it became common knowledge that he was a bit too fond of his male students. Thirty-six.

It's a serene world from your front steps at 2:20 in the morning: dim porch lights on houses black with sleep; sidewalks split the dark dewed lawns. But the night has a grimmer hold on Vince's imagination, and he shivers with the creeping sensation — even as he reminds himself it's impossible — that he's on the menu tonight.

" So what ... YOU want me to do this thing or not?" The two men stare across the bench seat of a burgundy Cadillac Seville. The driver asks: "How much would something like that cost?"

The bigger man, in the passenger seat, is impatient, restless, but he pauses to think. It's a fair question. After all, it is 1980, and the service industries are mired in this stagnant economy, too. Are the criminal sectors subject to the same sad market forces: inflation, deflation, stagflation? Recession? Do thugs suffer double-digit unemployment?

"Gratis?" repeats the driver, shifting in the leather seat.

"I know what it means. I was just surprised. That's all. You're saying you'll help me out with this guy for free?"

"I'm saying we'll work something out."

"But it won't cost me anything?"

And it says something about the man driving the Cadillac that in addition to not knowing what the word gratis means, he also doesn't realize that nothing is free.