Drawn to sixteen-year-old Lucia during a visit to Madrid's Prado museum, art historian Manuel draws parallels between Lucia's exotic beauty and the physical features of King Ferdinand and Queen Isabelle's daughter Juana the Mad, whose story Lucia and Manuel find themselves replaying in the modern world. 50,000 first printing.

NPR stories about The Scroll of Seduction

October 14, 2006 • Nicaraguan novelist and poet Giocanda Belli crafts the gripping story of the 16th-century Spanish queen Juana of Castile into a historical novel. The Scroll of Seduction was recently translated into English.

Excerpt: The Scroll Of Seduction 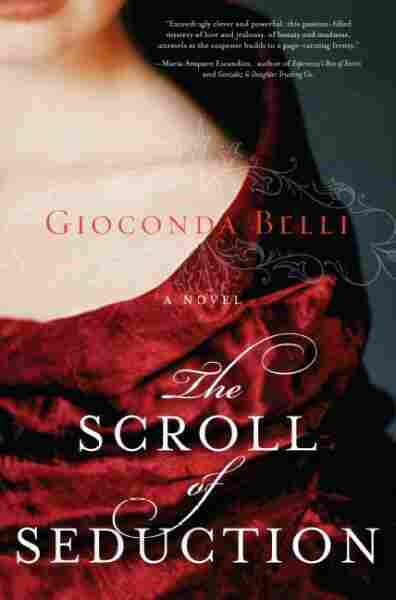 Manuel said he would tell me the story of the Spanish queen, Juana of Castile, and her mad love for her husband, Philippe the Handsome, but only if I agreed to certain conditions.

He was a professor at Complutense University. His specialty was the Spanish Renaissance. I was seventeen years old, a high school student, and from the age of thirteen, since the death of my parents in a plane crash, I had been at a Catholic boarding school run by nuns in Madrid, far from my small Latin American country.

Manuel's voice rose densely within me, like a surging tide on which floated faces, furnishings, curtains, the adornments and rituals from forgotten times.

"What conditions?" I asked.

"I want you to imagine the scenes I describe for you in your mind's eye, to see them and see yourself in them, to feel like Juana for a few hours. It won't be easy for you at first, but a world created with words can become as real as the shaft of light that at this moment illuminates your hands. It's been scientifically proven that whether we see a lit candle with our eyes open or imagine it with our eyes closed, the brain has an almost identical reaction. We can see with our minds and not just our senses. In the world I'll conjure up, if you accept my proposal, you will become Juana. I know the facts, the dates. I can place you in that world, in its smells and colors; I can make you feel its atmosphere. But my narration—because I'm a man and, what's worse, a rational, meticulous historian—can never capture—I can never capture—what's inside. No matter how I try, I can't imagine what Juana felt when she set off, at sixteen, on the armada's flagship, accompanied by one hundred and thirty-two vessels, to marry Philippe the Handsome."

"You said she didn't even know him."

"She'd never laid eyes on him. She disembarked in Flanders, escorted by five thousand men and two thousand ladies-in-waiting, to find that her fiancé was not at the port to meet her. I can't imagine how she felt, just as I can't begin to conceive of her innermost thoughts when she finally met Philippe at the monastery in Lierre and they fell so suddenly, so thoroughly, so violently in love that they asked to be married that very night, so anxious were they to consummate a marriage that had actually been arranged for reasons of State."

How often had Manuel made reference to that initial meeting? Perhaps he enjoyed seeing me blush. I smiled to dissimulate. Although I had spent the last several years in a convent, surrounded by nuns, I could picture the scene. I had no trouble at all imagining what Juana must have felt.

"I see that you understand." Manuel smiled. "I just can't stop picturing that young woman—one of the most educated princesses in all of the Renaissance—who, after succeeding to the throne of Spain, was locked up in a palace at the age of twenty-nine and forced to remain there until she died, forty-seven years later. During her formative years she was tutored by one of the most brilliant female philosophers of the day, Beatriz Galindo, known as 'La Latina.' Did you know that?"

"It's sad to think that jealousy drove her insane."

"Well, that's what they said. And that's one of the mysteries you can help me unravel."

"By thinking like her, putting yourself in her place. I want you to let her story flood your consciousness. You're almost the same age. And, like her, you also had to leave your country and be on your own since you were very young."

My grandparents dropped me off at the boarding school one September day in 1963. Although the stone building was austere and gloomy—high-walled, windowless, an imposing front door with an old coat of arms on the lintel—its solemnity perfectly suited my frame of mind. I walked down the tiled hallway and into the stillness of the reception area feeling that I was leaving behind a noisy world that in no way acknowledged the catastrophe that had cut short my childhood. Neither day nor night, countryside nor city, managed to register my sadness the way the silence of that convent did, with its one lone pine shading the tiny central garden that no one ever visited. Four years I had lived there resigned and uncomplaining. And though the other girls were pleasant toward me, they also kept a prudent distance, influenced, I think, by the tragedy that had thrust me in their midst. The nuns' good intentions surely contributed to my isolation. They must have told the other girls to be compassionate and sensitive toward me, to avoid doing anything to reopen my wounds or to further sadden me. They even refrained from talking about their family vacations and their home life in my presence, thinking, I imagine, that talking about their parents would make me miss mine. Their restraint coupled with my rather introverted nature and my initial unwillingness to discuss the issue of having suddenly become an orphan, dramatically reduced my possibilities of forging new and close friendships. What's more, I got good grades, and the nuns held me up as an example of the triumph of will against adversity, inadvertently widening the chasm that separated me from the others.

"To be honest, I don't exactly understand what you expect me to do. Of course I can speculate about what Juana might have felt, but she and I are centuries apart. We're the product of two different times. I don't see how you'll be able to deduce anything about her by my reactions."

"When it comes to feelings, what difference does time make?" he asked. I could read Shakespeare and Lope de Vega, the poetry of Góngora and Garcilaso, tales of chivalry, and still be moved by them. Time passed, settings changed, but the essence of passion, of emotions, of human relations, was surprisingly consistent.