Memoirs of a Literary Forger

Title
Can You Ever Forgive Me?
Subtitle
Memoirs of a Literary Forger
Author
Lee Israel

The author describes how, for nearly two years, she successfully executed a remarkable forgery caper in which she used her talent as a researcher and celebrity biographer to forge more than three hundred letters by literary notables.

NPR stories about Can You Ever Forgive Me?

September 10, 2008 • Over three years, Lee Israel faked 400 letters from famous dead writers and sold them for "some jingle." Following an FBI sting and six months of house arrest, she's out with a memoir about her experience.

Excerpt: Can You Ever Forgive Me? 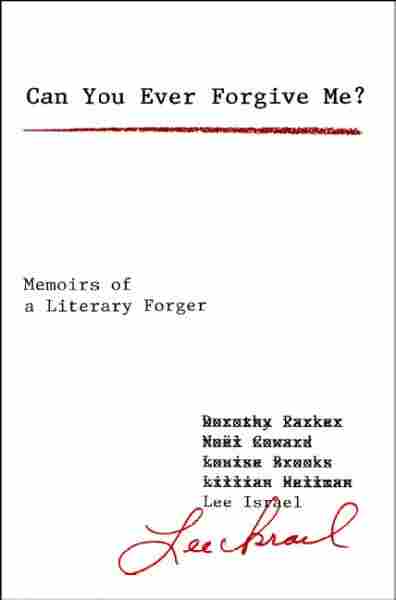 If with that last letter you pictured the urbane playwright in Switzerland, cigarette-holdered and smoking-jacketed, dashing off a letter in the 1960s from a cozy nook high up in Chalet Coward — the house he bought in the Alps to take advantage of Switzerland's kinda gentler tax laws — located at Les Avants, Montreux, just down the mountain from the David Nivens at Château d'Oex, where Coward entertained guests that included Marlene, Garbo, George Cukor, Rebecca West, and a group that Elaine Stritch once called "all the Dames Edith"...you would be wrong.

Every letter reproduced here, along with hundreds like them, were turned out by me — conceived, written, typed, and signed — in my perilously held studio apartment in the shadow of Zabar's on New York's Upper West Side in 1991 and 1992. A room with a view not of Alpine splendor, but of brick and pigeons, a modest flat I took in the spring of 1969 with the seventy-five-hundred-dollar advance that G. P. Putnam's Sons had given me to do my first book, a biography of Tallulah Bankhead. I sold those letters to various autograph dealers, first in New York City, and was soon branching out across the country and abroad — for seventy-five dollars a pop.

Noël Coward's soi-disant letters were typed by me on what I remember was a 1950ish Olympia manual, solid as a rock, bigger than a bread box, not so much portable as luggable. (Noël's Olympia was the one I would have the most trouble schlepping when the FBI was about to come calling.) For the nonce, I was content, researching my Tallulah bio — just me, my cat, and my contract, in my cozy, rent-controlled room-with-no-view.

I had never known anything but "up" in my career, had never received even one of those formatted no-thank-you slips that successful writers look back upon with triumphant jocularity. And I regarded with pity and disdain the short-sleeved wage slaves who worked in offices. I had no reason to believe life would get anything but better. I had had no experience failing.

Miss Tallulah Bankhead was a succès d'estime. The book had respectable sales and attracted many admirers, especially in the gay community. (By which I mean men. Lesbians don't seem to harbor the gay sensibility with the same vigorous attention to detail as the guys who, I suspect, are born with the Great American Songbook clinging to the walls of their Y chromosomes.) I continued to be wined and wooed by publishers, in various venues of young veal and Beefeater gin. My second book, Kilgallen, was conceived at one of those chic, deductible lunches, over gorgeous gin martinis. My work on the book began in the mid-1970s and continued for about four years.

I researched at the Library for the Performing Arts at Lincoln Center, where I was always comfortable. (I had even given the library a percentage of my take on Tallulah.) Kilgallen sold well and made the best-seller list of The New York Times. It appeared for one week with a snippy little commentary by the book-section editor, running as a kind of footer — the commentary, not the editor. Since I had written for the Arts and Leisure section frequently, when it was under the talented editorship of Seymour Peck, the paper's distaste for my work surprised and chagrined. No matter. I was now entitled to say that I was a New York Times best-selling author, and I frequently did. A particularly compelling part of the Kilgallen story was her controversial death, which had occurred just after she told friends that she was about to reveal the truth about the assassination of JFK. I remember swimming laps, with the mantra "Who killed Dorothy? Who killed Dorothy?" playing under my swim cap. I made money from my second book. Not Kitty Kelley, beachfront-property money, and no more than I would have made in four years in middle management at a major corporation...as if any major corporation would have had me, or I it. There was enough, however, to keep me in restaurants and taxis.