Dispatches from a Mercenary in Iraq

A private military contractor offers a look at the lives of hired mercenaries and their role in the private war with the insurgents in Iraq, going behind the scenes with the soldiers of fortune hired to protect executives, journalists, and other civilians.

NPR stories about Highway to Hell

John Geddes: In Defense Of The Soldier Of Fortune

August 12, 2008 • There are 100,000 private military contractors in Iraq. Mercenary John Geddes explains why he thinks this is a good thing. His new book Highway to Hell is an account of his experiences in Iraq as a soldier for hire.

John Geddes: In Defense Of The Soldier Of Fortune 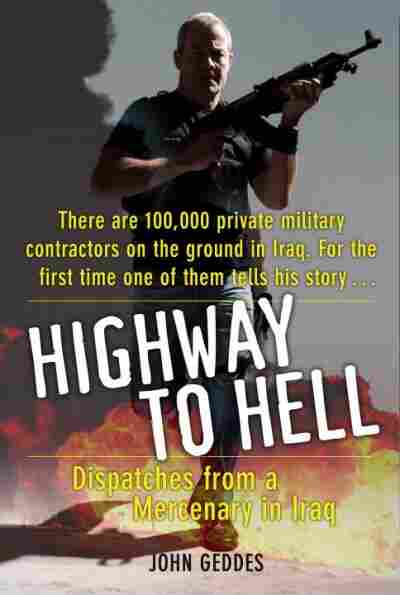 Our journey had begun at dawn that day when light welled up over the city, still cooling from the heat of the day before like a giant concrete radiator, and the haunting wail of the call to prayer floated down from a mosque tower over downtown Amman.
That chant of the muezzin to the faithful, the cliched sound track to every documentary ever made on the Middle East--you know exactly what to expect, but it still gets to you every time and never fails to raise the hairs on the back of your neck. These days, it never fails to set me on edge. It's become the theme song for episodes of death and mayhem and starts the day with an unwelcome reminder that a religion founded on a philosophy of order and mutual respect has been twisted into an alibi for murder and bombing.
I'd already showered and shaved and my kit had been checked, rechecked, and checked again; now it was ready to go, so there was nothing to do but get on with it. That constant checking of kit is an abiding theme in my life and it gets to be such a routine that I almost find myself looking into the mirror to check that I'm taking the right bloke on the job. I grabbed my small day sack with a survival kit in it, checked that I had my ID and passport, and then went downstairs to join the others in the hotel foyer.
The correspondent was seasoned, his cameraman an experienced guy who knew the ropes, and the soundman-cum-fixer was the third member of the crew. Ahmed was a veteran on the run.
I went through the drill with them. It always begins with the briefing--the "actions on," as the military call it--when I cover what they've got to do in the event of a road accident, an ambush, or a hijack. I stood there feeling like a member of the cabin crew going through the preflight emergency drill, while my clients, sprawled out on the hotel's leather sofas, looked just as bored as the average business passenger on a scheduled flight.
They smiled wanly when I got to the bit where I told them, "Remember, we don't stop at service areas; we piss on the side of the road. And we don't look at our dicks while we're doing it; we keep aware and look about us."
There were no women on that trip, but it would have been just the same for them, with a biological variation, of course, and the guys knew that I was serious when I told them, "There are service areas, but they're a no-no since a CNN crew stopped at one and got rumbled by insurgents. They were followed and a few rounds were fired through the back of the vehicle. The driver was killed and they were very lucky to get away."
It was time to go and they hauled themselves out of their seats and joined the pile of aluminum camera boxes stacked up under the front awning of the hotel, alongside the SUV.
"Hard cases up against the backseats, please," I told them, and the camera boxes were packed where they would afford at least some protection from any incoming rounds to our rear. The soft luggage--rucksacks and holdalls full of clothing--were piled in front of the hard boxes.
While the kit was being packed, the correspondent paced nervously up and down, as though he was rehearsing a piece to film. He'd been up drinking with the cameraman into the early hours and all they wanted to do was to get into the vehicle and go to sleep.
Meanwhile, Ahmed dragged on a foul-smelling cigarette, and I placed myself upwind of him, carefully watching the unfolding scene as the rising sun glinted off my mirrored shades. He's a nice guy, Ahmed, a family man who knows only too well that captured Jordanian drivers are always killed by insurgents. Why? Because they're not worth a bean on the hostage market, and anyway, they've betrayed Islam by chauffeuring the infidel invaders. Like all the Jordanians who daily risk their lives on the Baghdad run, Ahmed's either very broke or very brave, or, I suspect, probably both.
I pointed toward the hood of the SUV and he lifted it so that I could personally check the oil and the radiator levels. I even checked the windshield wash. Check and recheck--it's attention to detail that keeps you alive. I glanced at the tires, too, just to make sure they had some tread on them; then Ahmed turned the key in the ignition and I watched the needle on the fuel gauge rise to full.
"Thanks," I told him. "You happy with everything?" Ahmed smiled in reply and I turned to the TV crew. "All aboard, guys, time to roll. Just make sure you've got everything you need."