Traces the author's 2002 journey by foot across Afghanistan, during which he survived the harsh elements through the kindness of tribal elders, teen soldiers, Taliban commanders, and foreign-aid workers whose stories he collected along his way. By the author of The Prince of the Marshes. Original. 20,000 first printing.

NPR stories about Places in Between

August 28, 2006 • British diplomat and journalist Rory Stewart walked across Afghanistan after the fall of the Taliban, and later wrote about the experience in a memoir. Stewart talks about the motivation for the perilous journey across the warn-torn nation, and also about his stint as a provincial governor in post-invasion Iraq.

Excerpt: Places In Between 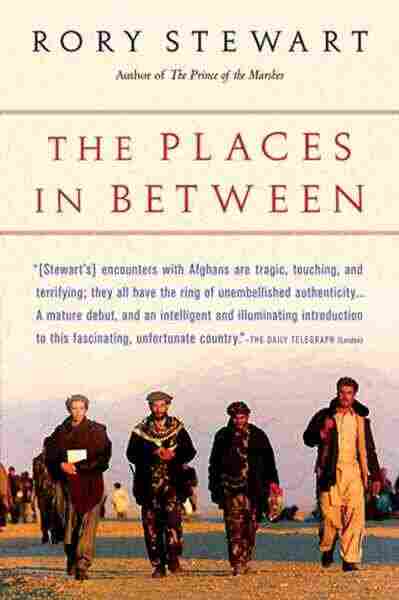 I watched two men enter the lobby of the Hotel ­Mowafaq.

Most Afghans seemed to glide up the center of the lobby staircase with their shawls trailing behind them like Venetian cloaks. But these men wore Western jackets, walked quietly, and stayed close to the banister. I felt a hand on my shoulder. It was the hotel ­manager.

“Follow them.” He had never spoken to me ­before.

“Now. They are from the ­government.”

I followed him to a room on a floor I didn’t know existed and he told me to take off my shoes and enter alone in my socks. The two men were seated on a heavy blackwood sofa, beside an aluminum spittoon. They were still wearing their shoes. I smiled. They did not. The lace curtains were drawn and there was no electricity in the city; the room was ­dark.

“Chi kar mikonid?” (What are you doing?) asked the man in the black suit and collarless Iranian shirt. I expected him to stand and, in the normal way, shake hands and wish me peace. He remained ­seated.

“Salaam aleikum” (Peace be with you), I said, and sat ­down.

“Waleikum a­-­salaam. Chi kar mikonid?” he repeated quietly, leaning back and running his fat manicured hand along the purple velveteen arm of the sofa. His bouffant hair and goatee were neatly trimmed. I was conscious of not having shaved in eight ­weeks.
“I have explained what I am doing many times to His Excellency, Yuzufi, in the Foreign Ministry,” I said. “I was told to meet him again now. I am ­late.”

A pulse was beating strongly in my neck. I tried to breathe slowly. Neither of us spoke. After a little while, I looked ­away.

The thinner man drew out a small new radio, said something into it, and straightened his stiff jacket over his traditional shirt. I didn’t need to see the shoulder holster. I had already guessed they were members of the Security Service. They did not care what I said or what I thought of them. They had watched people through hidden cameras in bedrooms, in torture cells, and on execution grounds. They knew that, however I presented myself, I could be reduced. But why had they decided to question me? In the silence, I heard a car reversing in the courtyard and then the first notes of the call to ­prayer.

“Let’s go,” said the man in the black suit. He told me to walk in front. On the stairs, I passed a waiter to whom I had spoken. He turned away. I was led to a small Japanese car parked on the dirt forecourt. The car’s paint job was new and it had been washed recently. They told me to sit in the back. There was nothing in the pockets or on the floorboards. It looked as though the car had just come from the factory. Without saying anything, they turned onto the main ­boulevard.

It was January 2002. The American­-­led coalition was ending its bombardment of the Tora Bora complex; Usama Bin Laden and Mullah Mohammed Omar had escaped; operations in Gardez were beginning. The new government taking over from the Taliban had been in place for two weeks. The laws banning television and female education had been dropped; political prisoners had been released; refugees were returning home; some women were coming out without veils. The UN and the U.S. military were running the basic infrastructure and food supplies. There was no frontier guard and I had entered the country without a visa. The Afghan government seemed to me hardly to exist. Yet these men were apparently well ­established.

The car turned into the Foreign Ministry, and the gate guards saluted and stood back. As I climbed the stairs, I felt that I was moving unnaturally quickly and that the men had noticed this. A secretary showed us into Mr. Yuzufi’s office without knocking. For a moment Yuzufi stared at us from behind his desk. Then he stood, straightened his baggy pin­-­striped jacket, and showed the men to the most senior position in the room. They walked slowly on the linoleum flooring, looking at the furniture Yuzufi had managed to assemble since he had inherited an empty office: the splintered desk, the four mismatched filing cabinets in different shades of olive green, and the stove, which made the room smell strongly of gasoline.

The week I had known Yuzufi comprised half his career in the Foreign Ministry. A fortnight earlier he had been in Pakistan. The day before he had given me tea and a boiled sweet, told me he admired my journey, laughed at a photograph of my father in a kilt, and discussed Persian poetry. This time he did not greet me but instead sat in a chair facing me and asked, “What has ­happened?”

Before I could reply, the man with the goatee cut in. “What is this foreigner doing ­here?”

“These men are from the Security Service,” said ­Yuzufi.

I nodded. I noticed that Yuzufi had clasped his hands together and that his hands, like mine, were trembling ­slightly.

“I will translate to make sure you understand what they are asking,” continued Yuzufi. “Tell them your intentions. Exactly as you told ­me.”

I looked into the eyes of the man on my left. “I am planning to walk across Afghanistan. From Herat to Kabul. On foot.” I was not breathing deeply enough to complete my phrases. I was surprised they didn’t interrupt. “I am following in the footsteps of Babur, the first emperor of Mughal India. I want to get away from the roads. Journalists, aid workers, and tourists mostly travel by car, but I—”

“There are no tourists,” said the man in the stiff jacket, who had not yet spoken. “You are the first tourist in Afghanistan. It is mid­winter—there are three meters of snow on the high passes, there are wolves, and this is a war. You will die, I can guarantee. Do you want to ­die?”

“Thank you very much for your advice. I note those three points.” I guessed from his tone that such advice was intended as an order. “But I have spoken to the Cabinet,” I said, misrepresenting a brief meeting with the young secretary to the Minister of Social Welfare. “I must do this ­journey.”

He had taken from Yuzufi the tattered evidence of my walk across South Asia and was examining it: the clipping from the newspaper in western Nepal, “Mr. Stewart is a pilgrim for peace”; the letter from the Conservator, Second Circle, Forestry Department, Himachal Pradesh, India, “Mr. Stewart, a Scot, is interested in the environment”; from a District Officer in the Punjab and a Secretary of the Interior in a Himalayan state and a Chief Engineer of the Pakistan Department of Irrigation requesting “All Executive Engineers (XENs) on the Lower Bari Doab to assist Mr. Stewart, who will be undertaking a journey on foot to research the history of the canal ­system.”

“I have explained this,” I added, “to His Excellency the Emir’s son, the Minister of Social Welfare, when he also gave me a letter of ­introduction.”

“From His Excellency Mir ­Wais?”

“Here.” I handed over the sheet of letterhead paper I had received from the Minister’s secretary. “Mr. Stewart is a medieval antiquary interested in the anthropology of ­Herat.”

Yuzufi, who was staring at the ground, nodded ­slightly.

The two men talked together for a few minutes. I did not try to follow what they were saying. I noticed, however, that they were using Iranian—not Afghan—Persian. This and their clothes and their manner made me think they had spent a great deal of time with the Iranian intelligence services. I had been questioned by the Iranians, who seemed to suspect me of being a spy. I did not want to be questioned by them ­again.

The man in the stiff jacket said, “We will allow him to walk to Chaghcharan. But our gunmen will accompany him all the way.” Chaghcharan was halfway between Herat and Kabul and about a fortnight into my ­journey.

The villagers with whom I was hoping to stay would be terrified by a secret police escort. This was presumably the point. But why were they letting me do the journey at all when they could expel me? I wondered if they were looking for money. “Thank you so much for your concern for my security,” I said, “but I am quite happy to take the risk. I have walked alone across the other Asian countries without any ­problems.”

“You will take the escort,” said Yuzufi, interrupting for the first time. “That is ­nonnegotiable.”

“But I have introductions to the local commanders. I will be much safer with them than with ­Heratis.”

“You will go with our men,” he ­repeated.

“I cannot afford to pay for an escort. I have no ­money.”

“We were not expecting any money,” said the man in the stiff ­jacket.

“This is nonnegotiable,” repeated Yuzufi. His broad knee was now jigging up and down. “If you refuse this you will be expelled from the country. They want to know how many of their gunmen you are ­taking.”

The two men stood up and left the room. They said good­-­bye to Yuzufi but not to ­me.

All rights reserved. No part of this publication may be reproduced or
transmitted in any form or by any means, electronic or mechanical,
including photocopy, recording, or any information storage and
retrieval system, without permission in writing from the publisher.

Requests for permission to make copies of any part of the work
should be submitted online at www.harcourt.com/contact
or mailed to the following address:
Permissions Department, Harcourt, Inc.,
6277 Sea Harbor Drive, Orlando, Florida 32887-6777.